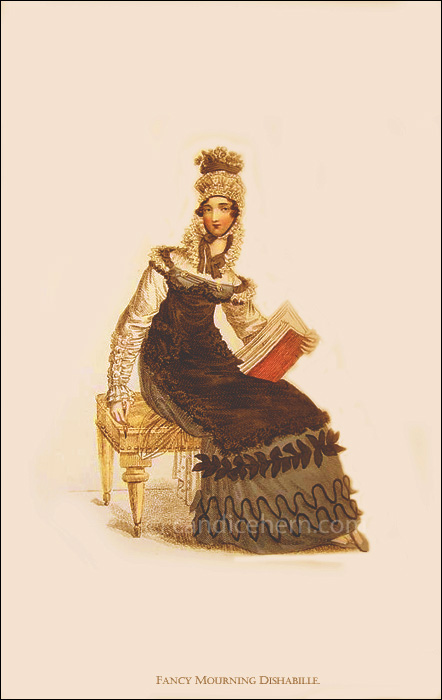 The title of this print indicates that this dress is mourning wear for daytime, “Dishabille” suggesting a morning dress, ie the category of Undress. “Fancy” simply means that this would have been worn by an affluent women, perhaps to receive visitors, but not simply to hang around the house.

As explained in the General Observations on Fashion and Dress:

“However little versatility can possibly be attached to the sable garment of sorrow, yet the Print we have presented to our readers representing the home costume of a lady of high fashion, will prove to them how busy Fancy is in her endeavours to throw a changeful hue over the tinct of solid black.”

And how busy the dressmaker is to create as many stylish mourning ensembles as possible for her fashionable clientele!

By January of 1818, mourning for Princess Charlotte, who had died on November 6, 1817, would have moved into Half Morning, as suggested in the Observsations (“… general mourning will be much abridged”).

“Morningslip of grey Merino crape, ornamented with black round the border in ranges of leaves; the slip made low, without sleeves, and worn over a cambric spencer, ornamented with fine muslin, embroidered at the edge with black, and finished at the throat with a triple ruff of muslin, tied in front with black love. Black sarsnet French apron, edged round with a newly invented trimming of black love. Cornette of fine muslin, crowned with a garland of black flowers. Black chamois slippers.”

I am not sure exactly what “black love” is, though it is mentioned from time to time in describing mourning costumes invented by Mrs. Bell.

This article is featured in: Regency Collections ~ Within Collections: Fashion Prints, Mourning Attire