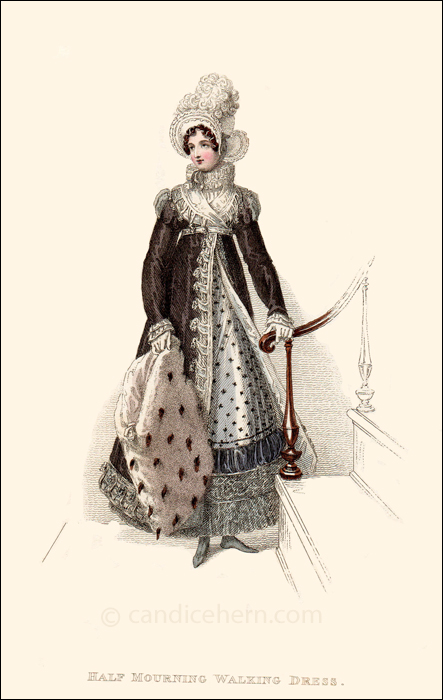 Queen Charlotte had died on November 17, 1818, at which time the Lord Chamberlain called for 6 weeks of full mourning. By January, half mourning was acceptable. (Half mourning allowed whites, grays, and lavenders to relieve the deep black of full mourning.)  The fashion prints in magazines for the previous month showed full mourning for the Queen. January prints showed a variety of half mourning, as here, with this beautiful walking ensemble.

“A round dress of figured silk, the ground grey, with a small black leaf: the body is made partially high round the shoulders and back, but sloped low in front of the bust; it is trimmed with a puffing of grey crape, ornamented between each puff with a jet bed. Short full sleeve, tastefully finished in the Spanish style with black satin slashes. The bottom of the skirt is trimmed with a deep flounce of black crape, embroidered in grey silk: this is surmounted by a plain band of black crape, richly embroidered in grey silk; and the whole is finished by a broad band of bias black satin laid on full. Fichu of white crape, with a very full white crape ruff. Over this dress is a pelisse composed of either black or grey velvet, lined with white sarsnet. The body is made tight to the shape, and comes up high behind, but as no collar; it is sloped before as to display the fichu; it wraps across the front, and has a falling white satin pelerine, which has a very graceful effect on the shape. The sleeve is rather tight; the shoulders are finished by puffings of white satin, and the bottom of the sleeves ornamented with full bands of white satin. The trimming, which goes all around the pelisse, consists of satin coquings interspersed with leaves. Head-dress, a gipsy heat, composed of white British Leghorn, and ornamented with a full plume of ostrich feathers; the brim is turned up before and behind. Black leather half-boots. White kid gloves. Ermine muff.”