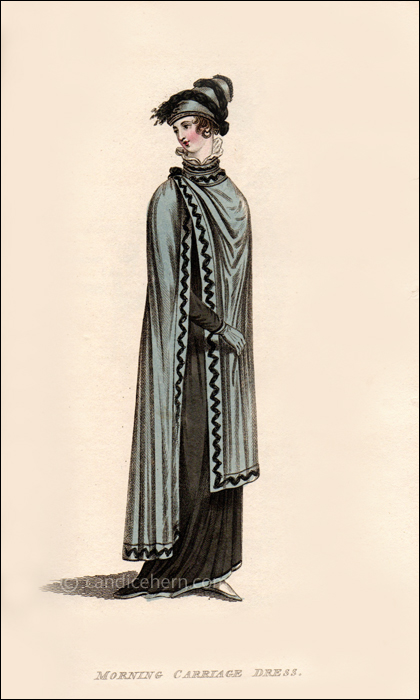 One has to wonder if the title of the print ought to have been “Mourning Carriage Dress” as it is clearly a half-mourning ensemble. Princess Amelia, youngest daughter of King George III, had died in November, and the Court declared that official mourning should last until January 11. Note that though the print is dated January 1811, it actually appeared in the December 1810 issue of the magazine. La Belle Assemblée always dated its fashion prints and fashion commentary for the upcoming month. So it had really only been one month since the Princess died when this print was published.

“CARRIAGE DRESS: Gown of black Italian gauze worn over white, with long sleeves made high in the neck, with antique ruff à-la-Queen Elizabeth, ornamented round the bottom with a grey flossed silk trimming. A mantle of French grey satin, with collar fastened on the right shoulder with black brooch, and trimmed entirely round with a rich stamped velvet, lined with the same colour. A bonnet to correspond, with stamped velvet flower in front. Shoes of black or grey kid; gloves of the same.”

In the “General Observation of Fashion and Dress,” more is said about mourning:

“A general transition from black to grey has happily relieved the social board from much of that air of gloom and sadness which it was feared would overcast it at this festive season; but there is still a cloud which hangs over the nation that must disperse, before the fashionable world will be restored to its brilliancy, or its bustle be seasoned with gaiety.”