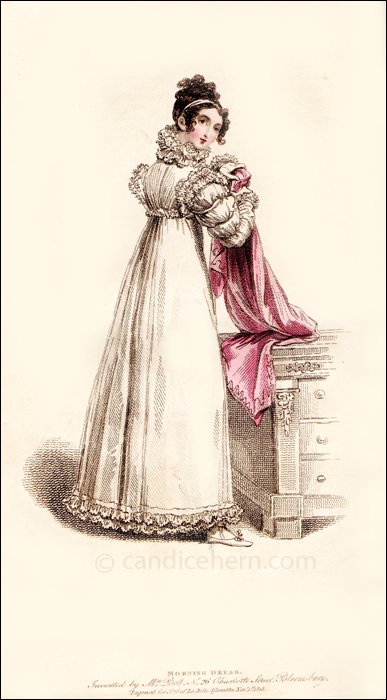 The combination of a white dress and a white spencer is not uncommon among fashion prints, nor among extant dresses of the period. It often seems to be a single garment, but the magazine descriptions always take care to describe the dress beneath the spencer. As a morning ensemble, perhaps this dress might have been worn at home without the spencer, but with the spencer for morning calls.

“Half high dress of the finest jaconet muslin, finished at the bottom by a double flounce of pointed lace. The body is very richly ornamented with letting-in lace, disposed in a very novel and striking manner. Plain long sleeve, very elegantly finished at the wrist by an intermixture of muslin and lace. The white satin spenser worn with this dress is truly elegant and novel; for the form of the back and sleeve we refer our readers to the Print. We have to observe that the sleeve, which is richly ornamented with blond lace, is formed in a style of peculiar novelty and taste, as is also the front of the spenser, which is cut so as to display the shape of the bosom to great advantage. The rich lace ruff worn with this dress is different from any that our fair readers may have yet seen, being formed bt Mrs. Bell upon an entirely new plan. Independent of the novelty of these ruffs, they possess a great advantage over the old ones in being uncommonly becoming. Head-dress is a simple bandeau twisted through the hair; white kid slippers and gloves. Of the many morning dresses that have fallen under our cognizance, we do not recollect one so peculiarly adapted to the carriage costume; it possesses that elegant simplicity which should be distinguishing characteristics of a gentlewoman’s undress, at the same time that it is composed of the most exquisite and costly materials; we think, upon the whole, it may be ranked among the happiest inventions of Mrs. Bell, to whose excellent taste and indefatigable exertions we have lately been indebted for many novel and elegant dresses.” 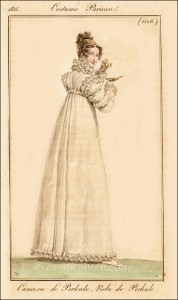 When reading such effusive praise of Mrs. Bell, which is found regularly in this publication, one has to wonder if she did not write the commentary herself! HOWEVER, though she claims to have invented this dress, it appeared two months earlier in the French magazine Journal des Dames et des Modes. The French print  from the September 10, 1815 issue is shown at right. The only differences are the features of the face, and the action of holding a teacup rather than a shawl. The dress is identical. Perhaps the La Belle Assemblée artists, or editors, thought that adding furniture and a shawl to the print would hide the fact that the dress was in fact a French invention, not Mrs. Bell’s.

Click on the print to see a larger version.