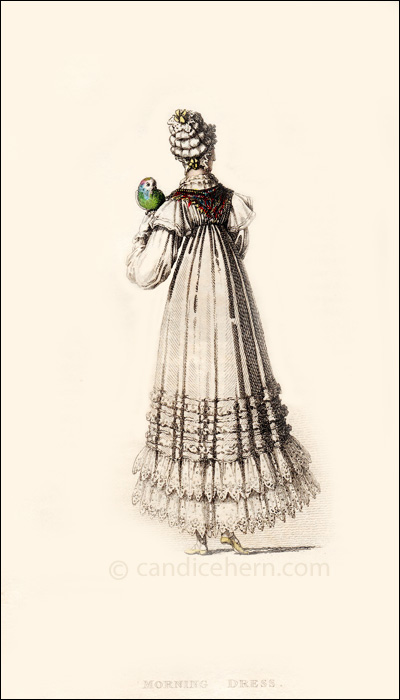 Indoor morning dresses were always made comfortably loose and somewhat full. By 1816, that fullness marked most categories of fashion, as does the deep ornamentation of the hem, as shown here. More gathering at the back helped to created the bell-shaped silhouette of the skirt, a style which would become much exaggerated in the next five or more years.

“A round dress, composed of cambric; the skirt is finished at the bottom with four rows of rich embroidery and two flounces of work; it is vert full; and the body [ie bodice] which is a chemisette, has also considerable fullness thrown behind. The body is made up to the throat, and trimmed at the neck with a double frill of rich work: it is made very full behind, but plain in front. A long loose sleeve, finished at the wrist by three puffings and a single fall of narrow work. Head-dress a morning cornette, composed of fine clear muslin, with a border to correspond. The form of this cornette is uncommonly novel and striking; the crown is ornamented, something in the style of a turban, with rolls of muslin, and finished at the top by a bow of straw-coloured ribbon. Gloves and sandals of straw colour. A new pattern silk handkerchief thrown carelessly over the shoulders, completes the dress.”