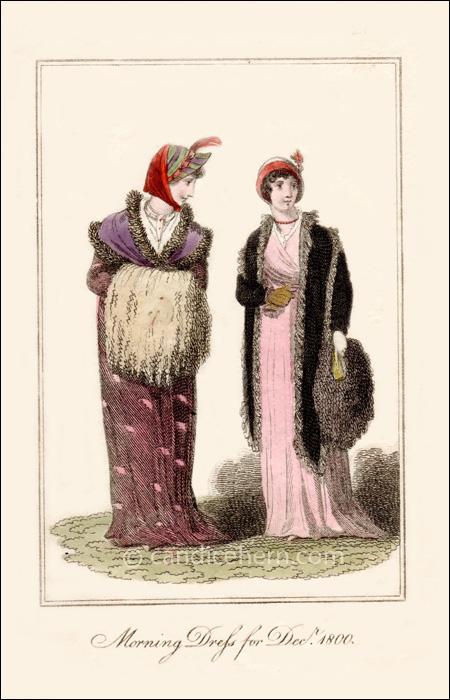 There are several terms in the description that require some definition.

The hat on the left is made of “Union striped velvet.” The Act of Union, joining Great Britain and Ireland into the United Kingdom, was passed on May 5. A lot of patriotic elements turn up in fashions of this year.

On the same figure, the handkerchief tied around her neck could be made of “Burdett,” which was a fabric made of mixed silk and cotton.

The “Opera handkerchief” around her shoulders might also be called a tippet.

On the right figure, the “Spencer mode cloak” is an odd name for what looks to be a pelisse.

Her hat is called a “De Camp” hat, but I have found no reference to that term. It is likely named for a particular modiste or milliner.

Sadly, there is no mention of the muffs. It would be nice to know from what fur or other material they were made.

“In Morning Dresses, the Obi stocking and slipper, or a dark Mulatto colour, are much worn.”