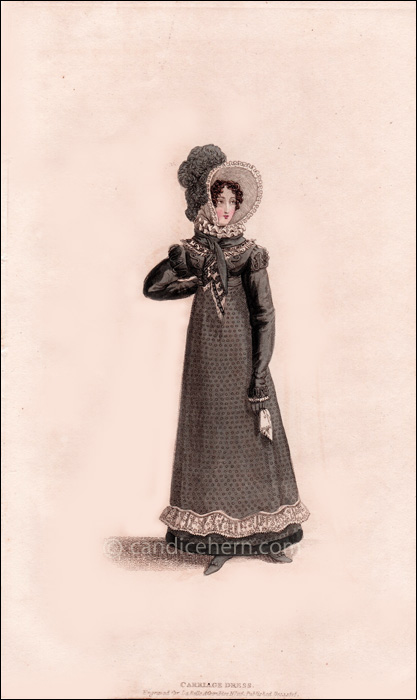 These specific fabrics were prescribed due to their lack of shine or sheen, which was considered inappropriate for full mourning, as was any shiny jewelry.

Although the dress shown here includes some bits of white trimming, it would still have been considered full mourning. In the first week or two of public mourning, women primarily wore unrelieved black.  But by the 3rd week of a prescribed 6 weeks of full mourning, bits of white could creep in without being considered inappropriate. But other colors and shiny fabrics were still prohibited.

Though the print is titled “Carriage Dress,” it could also have served as a walking dress.

“Round dress of Bombazine, elegantly finished at the border with a broad black velvet, surmounted by a flounce of fine white muslin, headed by a rouleau of of the same. Black velvet spenser, with a sautoir, or half handkerchief, of mourning shawl manufacture. Bonnet of white crape, with full plume of black ostrich feathers. Bouilloné ruff of fine muslin. Black chamois slippers and gloves.”