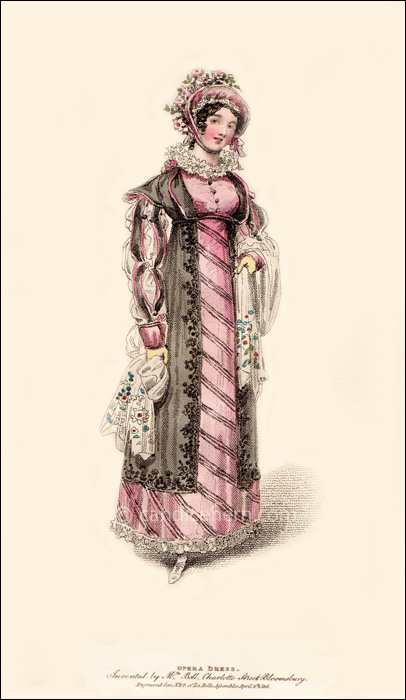 The fashions of 1816 begin to display the fussy, full-blown styles that will prevail throughout the end of the decade and into the next. Gone are the simple neoclassical lines of the first decade of the new century. We are now heading toward the Romantic age, with its exaggerated puffy silhouettes and over-abundance of decoration and trimming. This ensemble would likely have been considered very fashion-forward in 1816, though it is a bit too much for my taste.

This is described as an Opera Dress, though it almost appears closer to a Walking Dress. However, attending the opera was not considered a formal occasion, so perhaps this ensemble would have been appropriate.

“Slip of pink satin, ornamented down the front and border with black velvet in bias, under a robe of black satin richly flowered with black velvet down the sides; full sleeves of black satin ornamented with pink, over a chemisette sleeve of white sarsnet. Hat of fancy spotted straw, lined with pink satin, with a superb wreath of full blown roses. Shoes of white satin; and white kid gloves.”

This article is featured in: Regency Collections ~ Within Collections: Half Dress