Ackermann’s Repository of Arts, May 1811. 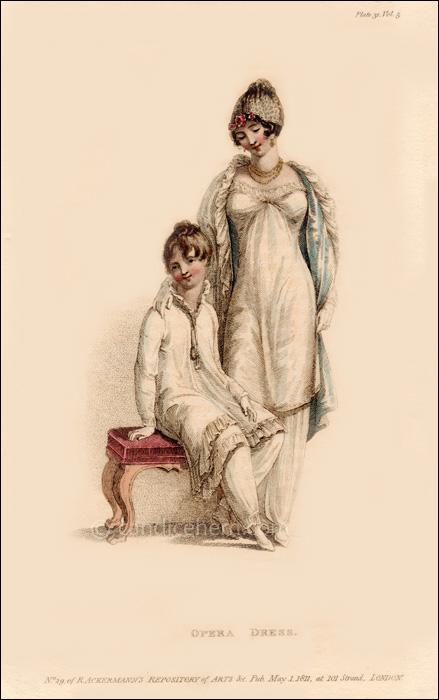 During the first 2½ years of publication, this magazine often showed children in their fashion prints, but after June 1812, they never again included children.

The woman in the print is clearly dressed to go out to the Opera. The child, though, is problematic. She is dressed with lots of lace trim, and wears kid gloves and slippers, a very lovely outfit. But she would not have accompanied her mother to the Opera, as children this young did not. Perhaps she is simply a well-dressed child whose affluent mother dressed her in the best fashions. Or maybe she dressed in one of her best dresses to show her mom that she could go with her to the opera, if only she was allowed.

“OPERA DRESS. A white muslin robe, with long sleeves. An Algerine tunic of white satin, trimmed round the bottom and bosom with net or silver fringe, simply confined in the center with a regency broach. A Turkish cloak, or short coat, with arm-holes, composed of plain Indian muslin, similar with the robe, and lined with cerulean blue sarsnet; trimmed round the back and down each side with blond lace, put on very full, The cloak thrown open in font, so as to exhibit the tunic and under-robe. A helmet cap, composed of silver net and spangles, ornamented with a cluster of the Labrador roses in front. A treble neck chin and ear-rings of elastic Indian gold. Gloves and shoes of white kid.

“CHILD’S DRESS. A short frock and trowsers of plain Indian muslin, trimmed with thread lace, or flounces of the same. A short French tunic coat of white sarsnet or cambric, with full-arched collar, tied at the throat with a silk cord and tassels, and the bottom trimmed with lace, similar to that which ornaments the frock and trowsers. White kid gloves and slippers. Hair a tufted crop.”