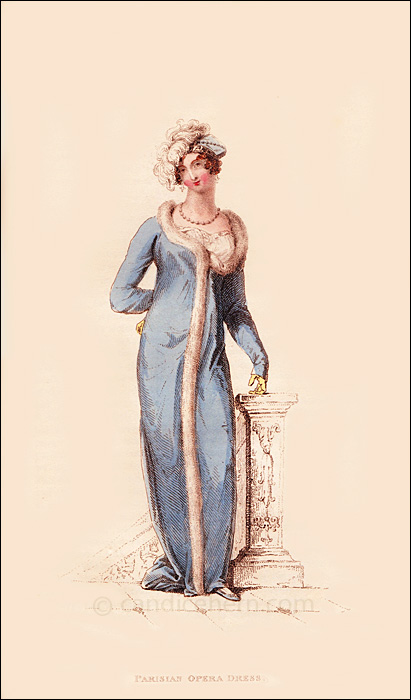 Generally, when a British magazine labels a fashion print as “Parisian” or “French” it means the print was copied from the Paris edition of  Journal des Dames et des Modes. Though there are several similar fur-trimmed pelisses in the French magazine in 1812 and earlier, I have so far found none that is precisely this design. So perhaps it was not copied, but inspired be some of the French prints.

“An evening or dinner robe, of white muslin; with short fancy sleeve, appliqued with lace, and trimmed with a fall of the same article round the bosom. A loose robe pelisse, of celestial blue satin or velvet, trimmed down each side and round the neck with a full swansdown fur, and negligently confined in the center of the bosom. An imperial helmet cap, composed of blue velvet, ornamented with a silver bandeau and beads; a full white ostrich feather waving towards one side, Necklace and fancy ear-rings of pearl, or blue satin bead. Slippers of blue velvet or kid, with silver clasps or small buckle. Gloves of primrose kid.”