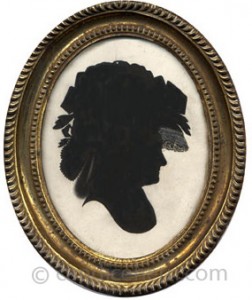 There are probably many of you who think of silhouettes only as black paper profiles cut with quick precision using tiny scissors. That is only one type of silhouette. Another type is the hollow cut silhouette, where the profile was cut and discarded, leaving the surrounding white paper. Black paper or silk was usually placed behind the hollow cut silhouette to reveal the profile. It is interesting to note that black paper did not become available until the late 1820s. Until then, black cut-paper silhouettes used paper that had been darkened with lamp-black or charcoal.

Another type of silhouette popular in England during the 18th and early 19th centuries was the painted silhouette. That is the type featured in this collection. 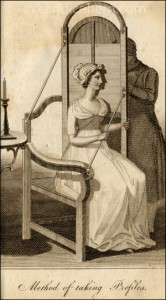 Portrait miniatures had been common since the time of Elizabeth I, but reached their peak of popularity during the 18th century. They served the same purpose as portrait photographs today. Their size made them portable, and miniatures were mounted in small traveling cases, lockets, brooches, and small frames.

There were many artists who specialized in portrait miniatures, and so they were very accessible; but they were not always cheap. Black painted silhouettes, known as profile miniatures, became an inexpensive alternative to the fully painted portrait miniature. (Some 18th century trade labels mention prices ranging from 2 to 6 shillings, depending on the frame or setting.) They also required less time for the sitter. Rather than several sittings of several hours, as required by a fully painted miniature portrait, only one brief sitting of a few minutes was required for the silhouette.

The term “silhouette” was not used until the 1830s. During the 18th and early 19th centuries, black silhouettes were known by various names. “Shades” was the most common term during the 18th century. “Shadow portraits” was also used. By the early 19th century, the term “profile” became more common. One of the trade labels used by John Miers (on the back of the silhouette in Figure 1) illustrates the various uses of the terms c1785 when the label was used. It reads: 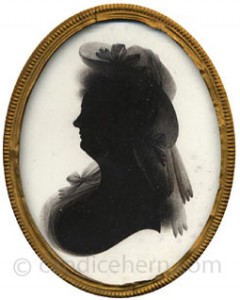 “Perfect Likenesses in miniature profile, taken by J.Miers, LEEDS, and reduced on a plan entirely new, which preserves the most exact Symmetry and animated expression of the Features, much Superior to any other Method. Time of sitting one minute. N.B. He keeps the original Shades, and can supply those he has once taken with any number of Copies. Those who have Shades by them may have them reduced to any Size, and dress’d in the present taste.”

Since most profilists advertised a required sitting of only one to five minutes, clearly some mechanical apparatus was used to quickly capture the silhouette, and to reduce it from life size. Figure 2 shows a typical device used for holding the sitter steady while the artist traces the profile. A candle projects a shadow of the sitter onto the glass screen, upon which is mounted an oiled sheet of paper. The artist traces the outline of the shadow, or shade, onto the paper. Most artists used a pantograph to reduce the profile to an appropriate size for painting, and for making subsequent copies. 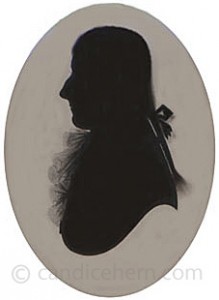 Various other devices were contrived to create exact likenesses, some that used a wire to pass over the sitter’s features, and lenses to reduce the image. Once the profile was created, the artist would send the sitter away while he painted the finished product, embellished with details of hair and dress that were not necessarily a part of the original profile capture.

One of the benefits of the profile miniature over the fully painted miniature was that copies could easily be made. Just as in the pre-digital age we distributed portrait photographs to friends and family — in 8×10 or wallet size — the 18th century sitter could have multiple copies of a silhouette made, and sent to loved ones. Many profilists kept copies of each of their works, so that sitters could call upon them at any subsequent date to create another copy, perhaps in a different size or setting. As John Miers states in the trade label above, he could even copy an older profile and paint it showing more up-to-date fashions. The copies also came in handy for mourning pieces. When a person died, the family might want to distribute mourning jewelry with silhouettes of the deceased. They could return to the original artist to have copies made, or they might have been able to take a silhouette to another artist who could use a pantograph to produce a copy. At the time of his death in 1821, Miers is said to have had copies of over 100,000 profiles made in his studio. 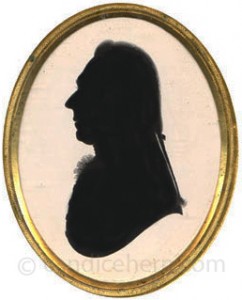 Painted silhouettes were produced on paper, plaster, ivory, and glass. Water-color paints were used on paper and sometimes Indian ink. Few artists used paper in the 18th century though it became more popular in the 19th century, especially after 1830 when more full-length silhouettes were created. Figure 8 shows a silhouette painted on paper around 1815. After 1800, “bronzing” became fashionable, ie gold paint used to show detail of hair and clothing — but never the facial features, which always remained black. (See Figures 7 and 9.) Some early 19th century artists painted the profile in dark gray and used black to delineate hair and dress, as in Figure 8.

Silhouettes on glass were painted on the reverse side of the glass, which was most often convex. When mounted with a flat paper surface behind, the painted silhouette threw a shadow onto the paper, creating a beautiful double-silhouette effect. The pigment of lamp-black, or soot, was sometimes applied with the thumb. A needle was often used to scratch out pigment to delineate detail. In the Hinton Gibbs example in Figure 6, the artist’s finger prints are visible in the sitter’s dress, and the delicate use of the needle can be seen in the faint rendering of curls on the woman’s forehead. 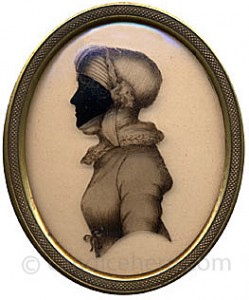 Silhouettes painted on plaster became popular in the late 18th century. The plaster surface, sometimes known as composition, was made of fine white chalk pressed flat under glass to create an even, smooth surface. Plaster was preferred to paper because it did not discolor over time or fade with sunlight. A pigment of pine soot and beer was said to be used, since neither water-color nor Indian ink was appropriate for the porous surface. Figures 1, 3, 4, and 5 are painted on plaster.

Ivory was a favored medium for silhouettes to be used in jewelry settings. Considering the small size of the jewelry silhouettes, it is often astonishing to find such intricate detail in hair and dress. (See the Collections article on Silhouette Jewelry.) One can only imagine the size of the brushes required for such delicate work. John Field was one of the finest painters on ivory (See Figures 7 and 9). Besides the small jewelry pieces, Field is one of only a few artists known to paint standard size silhouettes on ivory, as in Figure 7, which is mounted in a leather case. 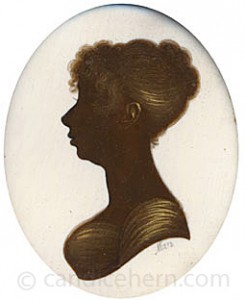 In painting the silhouette, the main outline of the profile, which had been rendered mechanically, was filled in with pure black (or dark gray, as in the Gillespie example in Figure 8). The details of hair and clothing were then “dragged” out using finer brushes and diluted pigment. The artist’s skill was demonstrated in the delineation of hairdos, hats, feathers, ribbons, shirt frills, etc. Note the fine detail of the lace on the hat in the example by John Miers shown in Figure 1, or the soft ruffles of the shirt frills in the Houghton & Bruce example in Figure 4, or the exquisite detail of the bonnet in the John Field example in Figure 9 (note that this silhouette is no bigger than a postage stamp).

Many of the profilists were skilled artists who worked in other mediums as well. Others were profile specialists with established studios. Several were itinerant. At least one, Hinton Gibbs (see Figure 6), was a member of the militia and brought his profile materials with him wherever he was posted, offering his services as a profilist to the local population. 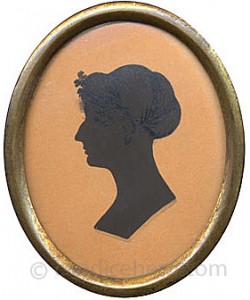 The most famous of the British profilists was John Miers. He worked in the north of England from 1781, and is said to have been the first to paint silhouettes on plaster. He relocated to London in 1788, setting up business on the Strand, where he remained until his death in 1821. That he left an estate worth over £20,000 — a huge amount at the time — is testament to his success. His sitters included King George III and Queen Charlotte.

Miers was a fine artist known for his exquisite treatment of diaphanous draperies and feathers. Though many of his early contemporaries used touches of gold and colored pigment to delineate clothing details, especially in silhouettes of military officers, Miers favored the pure black “shade.” Figures 1, 2 and 5 were painted by John Miers.

Miers trained several assistants, especially while working in the north. Among these were Samuel Houghton, whose shirt frills are as beautifully delineated as those of Miers. He departed for Edinburgh in 1785 and began a partnership with George Bruce, whom he trained in the Miers technique. (See Figure 4.) 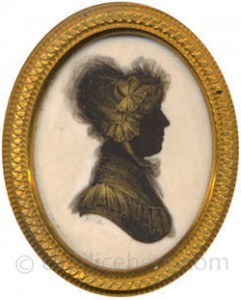 Miers’ most successful protegé was John Field, who came to work for him in London in 1800 and stayed on as “principal profile artist” until Miers’ death, and was responsible for most of the profiles enhanced with bronzing. (Even though his profiles at this time were signed “Miers”, that was a studio designation and does not signify that John Miers painted them.) After John Miers’ death, Field entered into a partnership with Miers’ son William. He started his own enterprise in about 1830. Field worked in other mediums and exhibited landscapes at the Royal Academy. His silhouettes are remarkable for their fine detail and delicate use of bronzing. (See Figures 7 and 9.) In 1831 he was appointed profilist to Queen Adelaide.

All of the silhouettes in this collection are British, and were produced before the term “silhouette” came into use in Britain. The term comes from Etienne de Silhouette, who was the French Comptroller-General in the 1750s. His cheese-paring policies ultimately cost him his position, and his name came to be associated with anything done cheaply. It also happened that his hobby was cutting profiles out of blackened paper. So, out of both his parsimony and his hobby came the term “silhouette.” It was used for many years in Europe before finally being introduced in England by the famous cut-paper profilist, Augustin Edouart, who explained the term in his book, A Treatise on Silhouette Likenesses, published in 1835.

To learn more about painted silhouettes, see the following sources:

This article is featured in: Regency Collections ~ Within Collections: Objects & Miscellaney, Silhouettes