“The Witzchoura Mantle and Spenser Promenade Dress, Invented and to be had only of Mrs. Bell, 26 Charlotte Street, Oxford Square.” 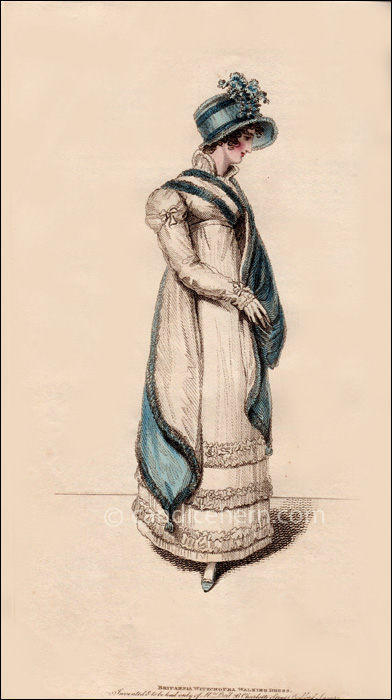 I’m sharing this print more for the effusive description in the magazine than for the print itself, though it is indeed a beautiful print. As you read the description, you should know that Mrs. Bell, the designer of the dress, was in some way related to the publisher, John Bell.  It is thought she may have been his daughter-in-law. In any case, her designs dominated the pages of La Belle Assemblée for its first 20 years, and I am quite convinced she wrote the descriptions herself, especially this one.

Note that the Witzchoura was generally a fur-lined mantle introduced from Poland around 1808.

The print is described in the magazine, probably by Mrs. Bell, as follows:

“French cambric high-dress with a chemise back, something broader than those of last month, and a waist as short as it can be made. The sleeve, which is of course long, is singularly novel and tasteful as our readers will see by the Print; three rows of rich worked muslin, placed one above the other, finish the dress at the bottom, and a full trimming of the finest Valenciennes edging goes round the bottom of the sleeve and the collar of the dress; the latter, which is extremely pretty, is composed of rich worked muslin to correspond with the trimming: it is byas, and falls back so as to display a little of the throat in front. The Witzchoura mantle and spenser which is worn with the dress is composed of blue twilled sarsnet, lined with white satin, and trimmed with Mrs. Bell’s new invented pearl silk trimming; the spencer is made of white satin to correspond with the mantle. We cannot refer our readers to the Print for the form of the Witzchoura, because it would only convey an inadequate idea of this most tasteful and elegant mantle; nor shall we attempt to describe the manner in which it is made, because we are convinced that our fair readers cannot form a judgment of it without seeing it. We must, in justice to Mrs. Bell, to whose elegant taste the public are indebted for the improved Witzchoura, observe that it is the most tasteful and becoming mantle we have ever seen: its form is extremely simple, and when properly put on, it falls in such easy graceful folds that even a tolerably pretty figure must be irresistible in a Witzchoura. The materials of this mantle are generally sarsnet, but satin or French silk are in estimation with some elegantés. The spenser and the lining are uniformly white, and the former is always composed of satin, but blue, light green, and the most delicate shade of wild rose shot with white are also prevalent. French bonnet made of pearl silk to correspond with the mantle, white kid gloves, and pale blue slippers.”