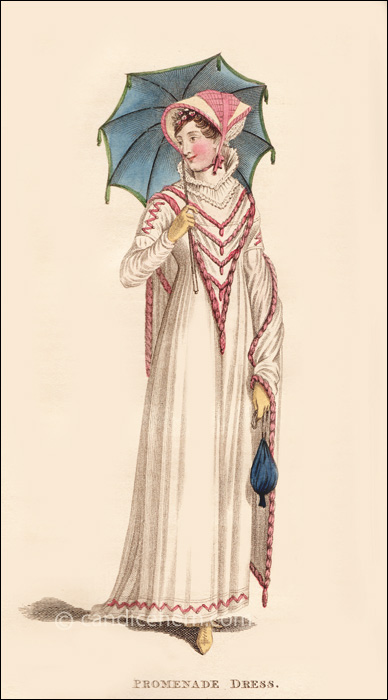 Note that the purse is called a ridicule. The term, which is seen often in French prints, possibly came about because it seemed a ridiculous notion in the late 18th/early 19th century to carry outside the dress those personal belongings formerly kept in large pockets beneath the dress. When waists rose and skirts narrowed, bulky pockets could no longer be accommodated without spoiling the line of the dress, and so the ridicule became an essential accessory. Around the mid-19th century, the term ridicule had morphed into reticule in English. Or perhaps it was the other way around. For the French term réticule, from the latin reticulum, meant a net or mesh bag. So it may be that both the French and English finally came around to the proper word.

“A round robe of India jaconet, trimmed round the bottom with ribband; a mantle of fine India mull muslin, or white crape, with ficher front, ornamented withe drawn ribband and tassels, terminating on one side with a point finished with a tassel, confined to the waist on the same side. A village hat of white chip, with a crown of blended crape and sarsnet, bound and tied under the chin with ribband, over a lace cawl, raised from the face by a short wreath of small French roses. Parasol and ridicule of purple and green shot silk; gloves of York tan; Roman boots of white Morocco.”