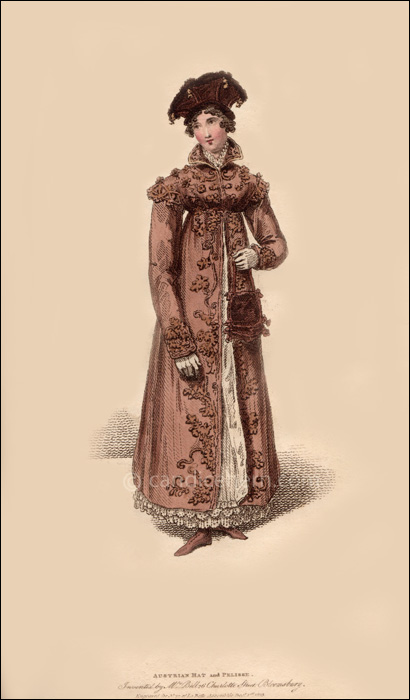 The elegant pelisse is given full display in this print, as it should be, but the clever Mrs. Bell wants everyone to understand the the dress hidden beneath is quite nice, too. So it is given a rather lengthy description, even though we can see very little of it.

The embroidery on the pelisse is described as gold, “the effect of which on the brown cloth is truly elegant.”  I suspect it must have been too complicated as task to render it in gold on the print, but imagine how fine it must have looked in person!

“PROMENADE DRESS. High dress composed of French cambric, made up to the throat, but without a collar; the body is quite plain at the top, but there is a slight fullness at the bottom of the waist behind; the back and shoulders are formed out of one piece, and the front, which is very full, is joined on just over the bosom, the fullness of the front is disposed in byas rows of gaging, which has a very pretty effect. The dress fastens before, and is trimmed round the neck with a triple row of the fahionable worked cambric, which resembles point lace. The skirt is ornamented in a simple manner. Plain long sleeve, finished at the wrist with narrow work to correspond. The pelisse worn with this dress is of the finest ladies’ cloth, the colour pale brown, and lined with white sarsnet; the body is quite tight to the shape, the back extremely broad, and the waist as short as possible; the sleeve long, plain, and tighter than they have been worn, is finished by a half sleeve singularly novel and pretty, which is ornamented, as also the bosom of the dress, with gold Maltese buttons. The pelisse is trimmed round with a superb gold embroidery, the effect of which on the brown cloth is truly elegant; there is no belt, but a slight embroidery to correspond goes round the waist. Helmet of brown cloth, with gold ornaments. Brown kid half boots, and brown or yellow gloves. We had almost forgot to notice the ridicule, for the form of which we refer our readers to the Print; it is composed of brown cloth to correspond with the pelisse, and finished in a very novel style with a light gold edging and tassels.

“This dress was invented by Mrs. Bell, No. 26, Charlotte-street, Bedford-square.”