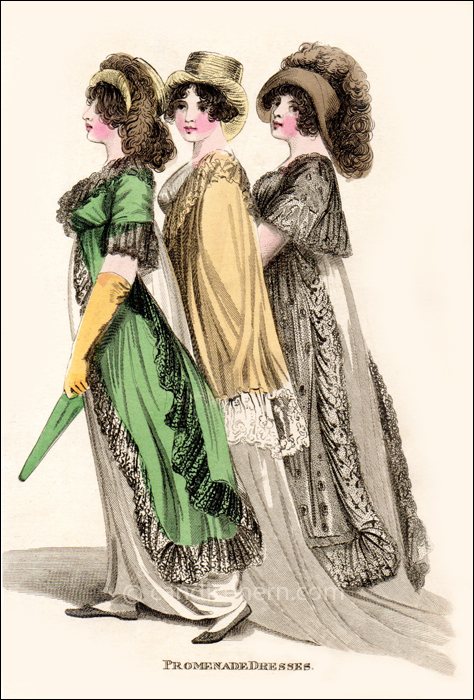 Fashions of London and Paris, May 1805.
“Promenade Dresses.”

Even though two of the dresses shown here include black lace, they are not mourning dresses. Black lace was simply very fashionable at this time. It is seen in lots of prints until around 1808, after which time it is seen primarily, though not exclusively, in mourning wear.

“Fig. 1.–A round dress of plain white muslin, with a spencer cloak of green silk, trimmed all round with deep black lace. A straw hat turned up in the front, ornamented with feathers.

“Fig. 2.–White muslin dress with a Spanish cloak of buff-coloured silk or muslin, trimmed with broad white lace. A straw hat turned up at the sides.

“Fig. 3.–A round dress of cambric muslin, with a black lace cloak, trimmed all round. A brown beaver Spanish hat, ornamented with a feather of the same colour.”

This description is followed by these General Observations on the latest fashions:

“The prevailing colours are purple, lilac, and green; Nankin great coats and spencers are much worn. The variety at present is so great in cloaks that it is impossible to say, in this number, what will be the prevailing fashion. Straw hats of various forms are universally worn. Worked lenos are preferred for dress, into every part of which lace is introduced. The hair continues to be worn the same as usual, except that it is now completely parted in front, and formed into straight bands over the forehead.”