Fashions of London and Paris, November 1804. 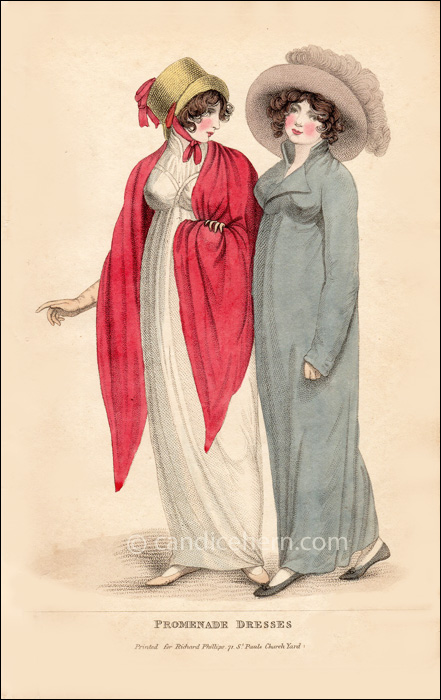 The fabulous hat on the right is named a beaver hat. That does not refer to a feminine version of the beaver top hat worn by gentlemen, but simply refers to the fabric, which is felted beaver fur. The shape of this hat is sometimes called a slouch hat. Since most hats of this period were made with brims quite close to the head, as in the example on the left, this large hat must have been seen as especially striking. Quite a fashion statement.

“Fig. 1.–A round dress of thick white muslin, with a habit-shirt of fine cambric. Large silk shawl, of morone colour. A straw hat, turned up in the front, and trimmed and tied under the chin with morone-coloured riband. Nankeen shoes.

“Fig. 2.–A pelisse of grey or fawn-coloured silk, made high in the neck with a collar. A large beaver hat, turned up  in front, and ornamented with a feather of the same colour.”

In the section titled General Observations, it says: “Very large beaver hats have been recently much worn.”