Rotten Row in Hyde Park was once the place to see and been seen in the late afternoon when the fashionable set rode, drove, or strolled along its path. Regency period maps label the path as “The King’s Road” or “The King’s Private Road.” It is believed that the term “Rotten Row” was likely as corruption of the French “Rue de Roi.”

The print is “Tom and His Cousin Dashing Among the Pinks in Rotten Row” from Life in London by Pierce Egan, 1821.

Rotten Row is still used as a bridle path today. 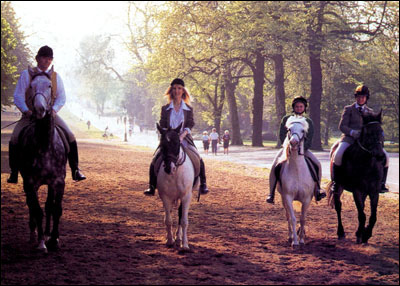