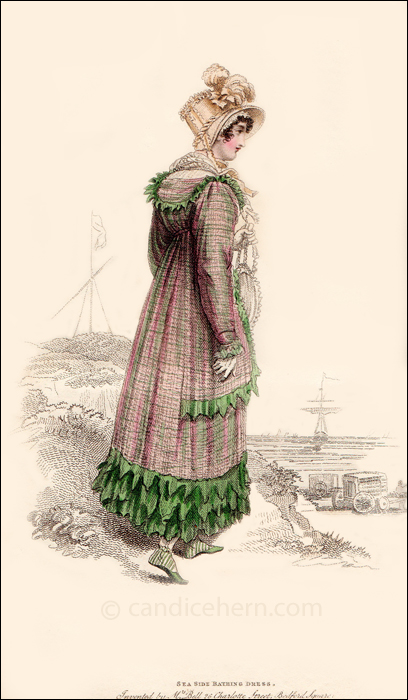 This print is particularly striking in its use of the plaid pattern, especially considering it was hand-colored. Consider also that 2000 or more copies of this print had to be hand-colored for this issue, and results are even more amazing. Every copy of this print I’ve seen is beautifully painted.

The background is also interesting as it shows a horse-drawn bathing machine. The striped boots are also to die for! But most interesting of all is how this dress is described as something one could easily get in and out of, most appropriate if one was to change clothes in one of the bathing machines for a dip in the sea.

“This very elegant dress is composed of the newly introduced Berlin silk. It is made in the form of a pelisse, and is so contrived that the stays, petticoat, and pelisse are all put on in a few moments. A flounce of green gauze, crape, or muslin, edged with an exceedingly pretty silk trimming, ornaments the dress; which, when on, is so finished and elegant that no one could suppose it was possible to adjust it in a few moments. A Leghorn hat, ornamented with a plume of straw-colour feathers, and green plaid leather boots, finish this dress, which we look upon as a chef d’oeuvre in its way, since, independent of the advantage which it is to a lady to be able to dress and undress so quickly, the most fastidious belle must confess that nothing can possibly be more becoming than this Sea Side Bathing Dress. The Wellington corset, with which it is worn, is admirably adapted to display in the most easy and graceful manner the natural proportions of the shape; and the tout ensemble of this elegant and useful habit is simple, tasteful, and in the highest degree appropriate.”

The bottom of the print says that this Sea Side Bathing Dress is “Invented by Mrs. Bell.” She is also, as it happens, the inventress of the Wellington Corset, described elsewhere as appropriate for pregnant ladies and ladies whose figures are not precisely slender. Her designs and inventions are mentioned with such frequency and in such effusive language that I have always believed her to be a sort of fashion editor for La Belle Assemblée at this time, and the author of much of the text praising her fashions.

This article is featured in: Regency Collections ~ Within Collections: Fashion Prints, Sea Side Fashions