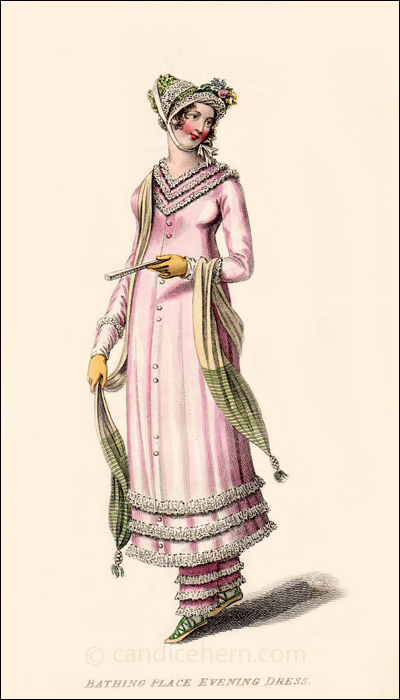 The print is labeled “Bathing Place Evening Dress,” though that is clearly an error as this is  not any sort of costume a woman would wear in the evening, and the magazine text calls it “A Fashionable Sea-Side Walking Dress.” Such errors in labeling a print pop up occasionally, but the accompanying text is always accurate. There are several blogs and other websites that describe this print as evening wear, based on the label, despite its inappropriateness for evening.

This is one of the only prints I’ve seen that shows a form of trousers on a woman. Perhaps such an ensemble was common at the sea shore, though I suspect it was seen only among the very fashionable. The sandals, too, look like they would have been the height of cool while promenading along the Steine in Brighton.

“A gown of white French cambric, or pale pink muslin, with long sleeves, and antique cuffs of thin white muslin, trimmed with Mechlin edging; made high in the neck, without a collar, and formed in points at the center of the bosom, with three rows of letting-in lace; confined down the front of the dress with small buttons; and hemmed round the bottom with three rows of deep Mechlin lace; made rather short, and worn over trousers of white French cambric, which are trimmed the same as the bottom of the dress. A cap composed of lace and light green silk trimming, tied under the chin, with a bunch of natural flowers in front. Hair in full ringlet curls, divided in the front of the forehead. A figured short scarf of pale buff, with deep pale-green border, and rich silk tassels; worn according to fancy or convenience; with gloves of pale buff kid; and sandals of pale yellow, or white Morocco, complete this truly simple but becoming dress.”

This article is featured in: Regency Collections ~ Within Collections: Fashion Prints, Walking Dresses, Sea Side Fashions