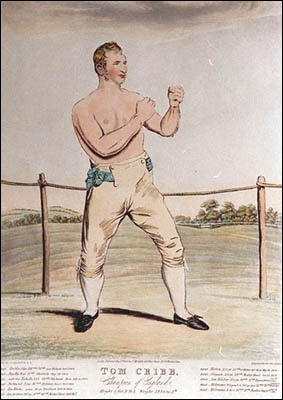 Another bare-knuckle boxer, Cribb won the English title in 1811. The next year he beat the American ex-slave, Tom Molineaux to become the world champion. He retired to run a tavern in London, the Union Arms at the corner of Panton Street in the Haymarket. Behind the bar was a large, red-papered private parlor where he displayed the numerous cups and belts and other treasured trophies of his prize-fighting career. It was the custom of the Corinthians of the day to assemble in Cribb’s Parlor to sample his excellent wines and to commiserate on the latest mills and bouts.

This article is featured in: Regency People, The Sporting Life