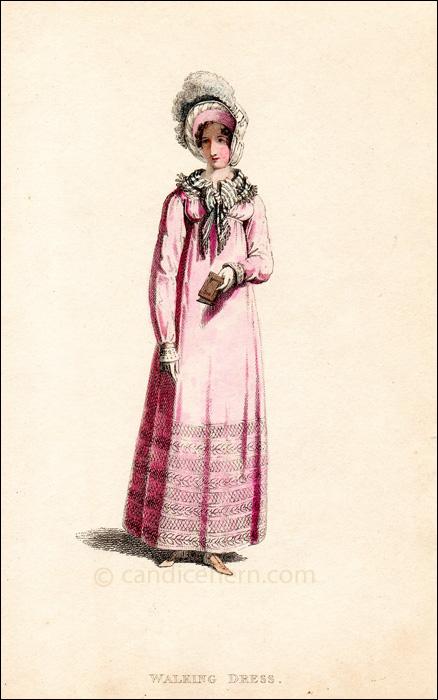 Though this is a lightweight summer dress, it is typically longsleeved. No matter how warm the weather, British women at this time did not appear outdoors during the daytime with bare arms. If sleeves are short, which is rare, long above-the-elbow gloves were worn.

“A jaconet muslin round dress; the bottom of the skirt trimmed with five rows of embroidery, in a running patterns of leaves. The body is full; it is cut low round the bust, and the fulness is gathered in there and at the bottom of the waist by a narrow band of muslin. Plain long sleeve, almost tight to the arm, and finished at the wrist with work. The fichu worn with this dress comes up very high on the shoulders, and partially displays the neck; a pink and white net silk handkerchief is fastened in a large bow and long ends before. Headdress is a bonnet composed of white satin, and lined with the same material: the brim, which is very large, turns up entirely in front; the edge is ornamented with intermingled rolls of pink and white satin. The crown is also adorned with rolls of pink satin, displayed in a very novel and tasteful style; it fastens under the chin with a row of pink satin at the left side, and is finished by a rich plume of down feathers. Blue kid sandals, and white kid gloves.” 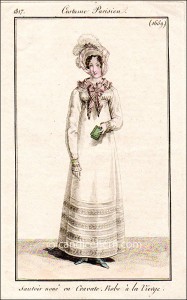 This print was “borrowed” from the Paris edition of Journal des Dames et des Modes, July 5, 1815, — so only the month before. (Click on the image at right to see a large version.) As with many instances of British prints based on the prints from this French magazine, the face is modified considerably. Sometimes, interestingly, the new British face is the only change. Here, the only other significant change in this Ackermann print is the color of the dress, which is white in the French print and pink here. However, I have seen several copies of this Ackermann print in which the dress is white. Note that the color of the dress is not mentioned in the above description.