Fashions of London and Paris, December 1799. 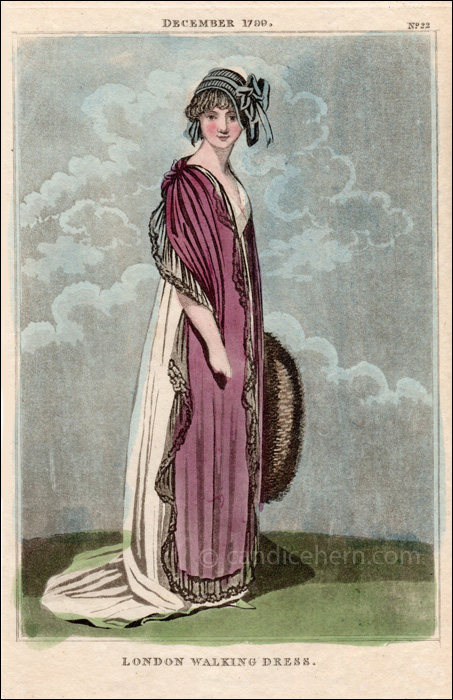 Though this print is unusual in that it shows a darker background than other prints — sort of a stormy sky — it also exhibits qualities that speak to its inexpensive production and price. Like other more upscale magazines, prints in this small  publication were hand-colored. But it is clear in this print that the colorists were neither professional nor meticulous. The green of the ground slops over the edges of the border and onto the train of the dress; the blue of the sky also bleeds onto the dress; and the purplish-pink of the cloak completely covers the fingers of the hand. It was likely more important that the colorists be fast rather than precise. As the price per issue was only 1 shilling 6 pence (as compared to 4 shillings for an issue of Ackermann’s Repository), the publishers were probably more concerned with producing multiple prints of the latest fashions per issue than with perfect coloring. They could reach a larger audience by keeping the price down.

“The York Hat, or Wood Hat, made of willow and gimp and trimmed with ribband of slate or any suitable colour.

“Parisian Cloak, made of one entire straight, unshaped piece of pink silk, covered all over with black crape. Trimmed round with broad black lace, and pinned up in the right shoulder.

“Plain dress of white muslin made as before [referring to the previous month].

“Hair quite close behind, combed full and long over the forehead..”