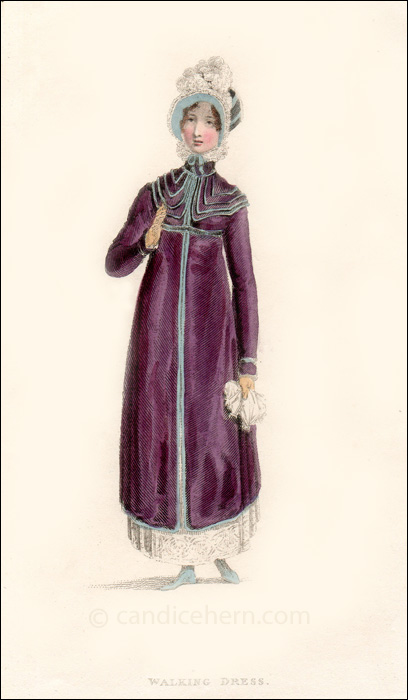 I like this pelisse as it imitates the multi-caped greatcoat a gentleman would wear. It is described as being made of erminette or velvet. The only definition of erminette I can find that makes sense is a type of processed rabbit fur made to imitate ermine. It would appear that the pelisse shown in the print is made of velvet. The hand-coloring shows it as a deep purple, though the description calls it puce, which is a more purplish-brown.

“A pelisse, of short walking length, made either in erminette or silk velvet of puce color, open down the front, and bound entirely round with celestial blue satin, terminating at the feet with a broad border of white lace; high plain collar, and treble copes bound to correspond; full lace ruff. The Spanish hat composed of erminette or velvet and blue satin, corresponding to the pelisse, trimmed round the edge with quilled lace, and ornamented in the front with a plume of ostrich feathers. Half boots, blue kid or erminette. Gloves, Limerick or York tan.”

This article is featured in: Regency Collections ~ Within Collections: Walking Dresses