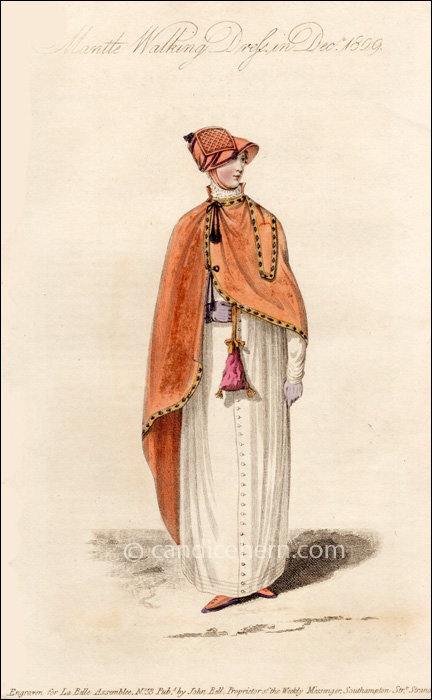 This gorgeous mantle is described in the text as scarlet. Yet every copy of this print I’ve seen has the mantle and hat painted in some shade of orange.

The lavender gloves are striking and unusual. In fashion prints, generally you see gloves of many colors in French prints, but much less often in British prints, where gloves are typically tan, white, or yellow.

The hat is called a “trencher bonnet,” which refers to a hat with a triangular brim rising to a point above the forehead. Interestingly, the graduation or academic mortarboard is also called a trencher.

Also note that the purse is called a ridicule. The term reticule did not come into use until the early 1830s, as a bastardized version of ridicule, which was a French term adopted by the British.

“MANTLE WALKING DRESS. A white cambric round dress, buttons from the throat to the feet; ornamented at the bottom with four small tucks; finished at the neck with a ruck of lace. A mantle of scarlet merino cloth, reaching to the petticoat behind, sloped up on one side to the waist, on the other to a little above the knees; confined over the bosom on the right side with cords and tassels; a tippet of the same material as the cloak is attached to the collar behind, and hangs in a point gracefully over the opposite shoulder;  the whole is ornamented with a rich embossed trimming of purple and orange velvet. A trencher bonnet, finished with tassels, and ornamented with purple ribband velvet. Boots of red Morocco; gloves of lavender kid or York tan; ridicule of scarlet velvet.”