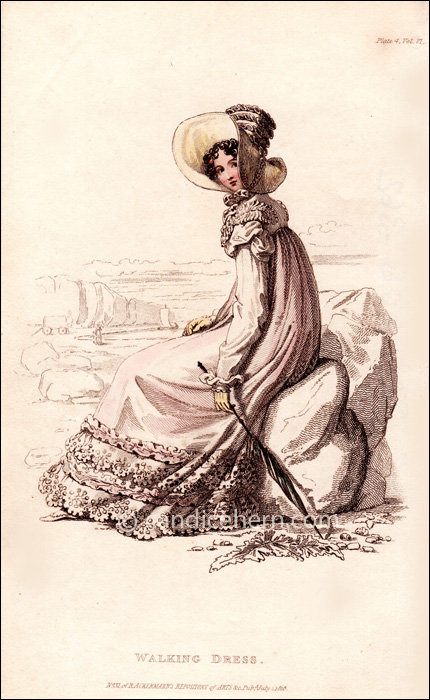 I am not a huge fan of this period of fashion, which is becoming too fussy for me. But this is a beautiful print, with the seashore in the background, complete with a bathing machine.

This is the period when hat brims became huge, as shown with this Leghorn hat. That term, by the way, does not refer to the style of this enormous hat. Leghorn is a fine plaited straw, made from an Italian variety of wheat that has been dried and bleached. The name specifically refers to the type of straw, and not the shape of the hat.

“A round dress, composed of thin jaconet muslin, over a pale peach-coloured sarsnet slip: the body of the gown is made high, it has a little fulness at the bottom of the waist, and is trimmed with a triple fall of lace at the throat, which is put on narrower before than behind, and stands back so as partially to expose the throat. Plain long sleeves of a moderate fulness, finished at the wrist with lace. The bottom of the skit is flounced with rich French work, which is surmounted by a rouleau of muslin, and this rouleau is headed by a fancy trimming. Over this is a second row of French work, with a rouleau and heading to correspond. The spencer worn with this dress is composed of white striped lutestring; the body is made plain, tight to the shape, and with a small collar. The waist is very short; the fronts are richly ornamented with braiding, which is disposed in a very novel manner over a part of the back. The sleeve is rather wide, and finished at the hand by a fulness of white striped gauze, which is doubled, and stands out from the arm: full epaulettes to correspond. Head-dress, a Leghorn hat, the brim large, and turned up behind in a soft roll in the French style: the crown is of a moderate height, and ornamented with four rouleaus of pale peach-coloured satin twined with white cord; it is tied under the chin with painted satin ribbon, White kid shoes, and straw-coloured gloves.”