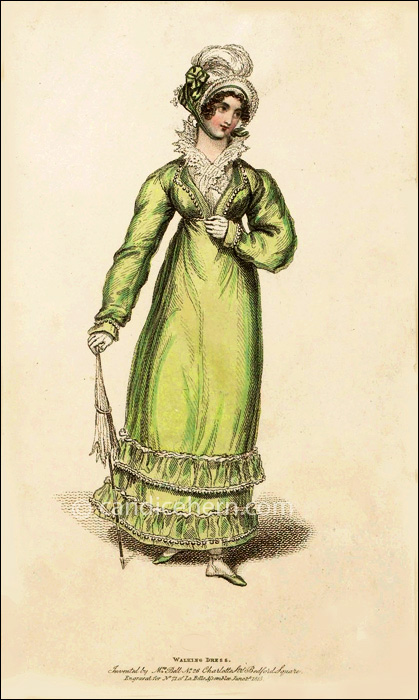 Mrs. Bell was a popular modiste during the Regency period, with a showroom at this time in Bedford   Square. She was related in some way to John Bell, the publisher of La Belle Assemblée, but the relationship is unclear. Most scholars believe she was his daughter-in-law. She was an ambitious self-promoter. Her fashions are featured prominently in La Belle Assemblée during its first 20 years or so, and also appear in Ackermann’s Repository of Arts. I suspect she also acted as fashion editor at La Belle Assemblée, providing not only the descriptions of the prints but also the general commentary on fashion, as her designs are always praised effusively.

Hems are shorter in 1815, typically above the ankle, giving us a glimpse of shoes and slippers and half-boots, as here. Also note, as mentioned in other posts, that the closed parasol is generally held by the point and not the handle.

“Promenade Dress: Round dress of Pomona-green poplin, trimmed, as our readers will perceive by the Print, in a style of uncommon novelty and taste. The body is made in a peculiarly becoming manner, the back plain at top, is drawn in with a slight fullness at the bottom of the waist, which displays the shape to the utmost advantage. For the front and sleeves, which are uncommonly tasteful, we refer our readers to the Print. A white body, finished with a triple frill of lace or work, is partially displayed, and gives a very light appearance to the dress. Bonnet of green moss silk, ornamented with a plume of white feathers, and green and white plaid ribband, which ties it under the chin. The bonnet, which is peculiarly becoming, is just enough in the French style to give an air of uncommon smartness to a pretty figure. Parasol and shoes to correspond with the dress; white kid gloves.”