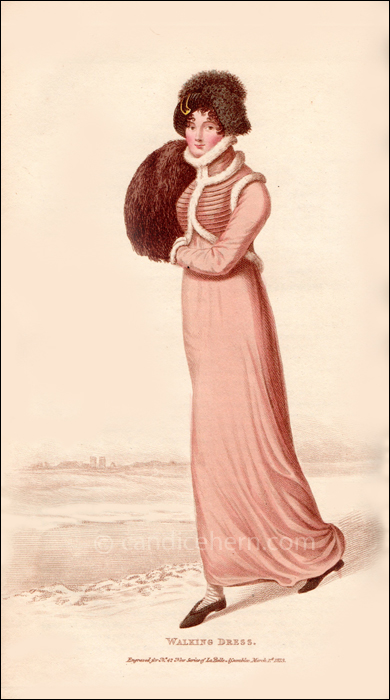 “A stone coloured habit, trimmed round the body with swansdown, and ornamented entirely across the bosom with a thick row of rich silk braiding to correspond. Waist much shorter than they have been worn for some time, and the sleeve longer and looser than those of the last three months. Regency hat of black beaver or seal skin, ornamented with an elegant feather of the same colour, and finished by a gold  button and loop on one side. Large bear or seal skin muff; stone cololured kid gloves, and black kid sandals. Some elegantes wear silk stockings, to correspond with the habit, but white are more general.”

The garment referred to as  a “habit” is clearly not a riding habit. The skirt is too short and not full enough. Also, the description applies only to the short sleeveless spencer jacket, so perhaps the term “habit” was also used for certain types of jackets.

It may sound odd that sandals are worn with this very wintery ensemble. During the Regency, “sandals” referred to any type of slipper with laces or ribbons across the instep or over the ankle, like a ballet dancer’s toe shoes. Though at first glance it may look as though she is wearing striped stockings, this model is actually sporting sandals with very complex lacing that goes well above the ankle.