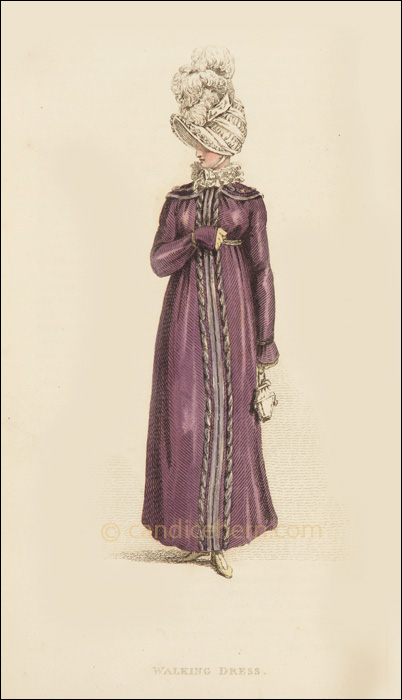 What looks to be a double collar on this pelisse is described as “round capes.” A gentleman’s great coat (as seen here) was generally trimmed with multiple capes, though they actually hung low, like a true cape. Women’s fashion, especially in outer wear, was often inspired by men’s fashion. The notion of capes, here, is very much abbreviated, with the capes barely covering the shoulders.

Though bonnets have certainly become larger by 1815, both in the crown and the brim, the show-stopper here is the height of the ostrich plumes.

“Pelisse of short walking length made of evening primrose-coloured velvet, ornamented down the front with satin trimming; round capes, trimmed to correspond; full lace ruff. A French bonnet, composed of white velvet and satin in reversed plaitings, trimmed round the edge with a quilting of lace; full plumes of ostrich feathers in the front. Half-boots of tan-coloured kid. Gloves, Limerick or York tan.”