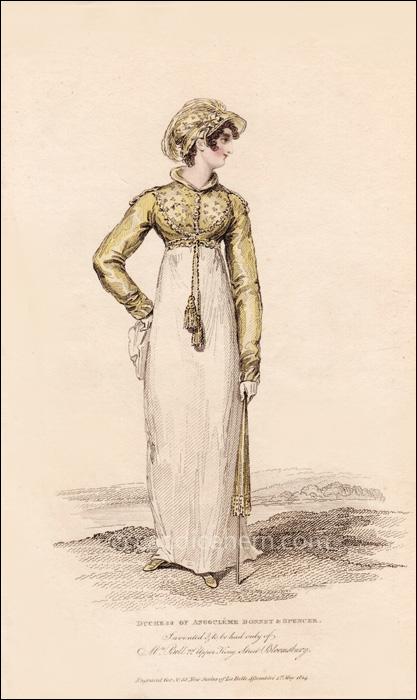 “Duchess of Angoulême Bonnet and Spencer. Invented & to be had only of Mrs. Bell 22 Upper King Street Bloomsbury.”

In April 1814, Napoleon abdicated and was exiled to the island of Elba. There were great celebrations in London honoring the restoration of the Bourbons as France’s royal family. One member of that family, the Duchesse d’Angoulême, the daughter of Louis XVI and Maire Antoinette, had been living in exile in England, and was widely feted during this time. In the ladies’ magazines, various fashionable garments were given the names of Bourbon or Angoulême, as with this spencer and bonnet.

I have two copies of this print. This one is titled Duchess of Angoulême Bonnet and Spencer. The title on the second copy of the print reads The Arch Duchess Guastalas Bonnet & Spencer. I have no idea why two different duchesses would be referenced on different copies of  the same print.

“ANGOULEME HAT AND SPENSER. This elegant spenser is worm over a walking-dress of jaconet muslin; it is made in rich primrose twilled sarsnet, shot with white; the back, which is full, shews the shape to much greater advantage than any spenser we have lately seen, as it is not so unbecomingly broad at the bottom as they have been worn; the front, as our readers will perceive, is tastefully ornamented with small fleurs de lis of chenille, the colour of the spenser, only a shade darker, which has a very striking effect. A full quilling of broad, soft ribband, to correspond, goes round the neck and down the front of the spenser; this trimming round the neck is in the ruff style, but much more becoming; a rich primrose silk girdle and tassels finishes the waist; the sleeve is ornamented at the bottom with a fancy trimming to correspond. The Angouleme bonnet is indisputably the most elegantly appropriate to the promenade costume that we have yet seen; it is composed of an original and novel material, which is put together in a manner equally novel and ingenious; the shape is a happy medium between the simplicity of the cottage and the dashing style of the small walking bonnet; it may be worn with or without strings, but the former is most general; the feather is placed rather on one side. Gloves slippers, and parasol to correspond.”

In the “General Observations on Fashion and Dress” that follows the description of the prints, we read more about the French royal family’s influence on fashion:

“The happy events which have taken place in France since our last Number have caused much exultation in all ranks of people in this country, nor have our fair readers failed to contribute their quota to the general joy, while their heads and bosoms are gaily decorated with the royal lily [ie the fleur de lis], every part of their dress is Bourbon or d’Angoulême; and never perhaps did English belles look more attractively lovely than in those colours and ornaments, which shew their attachment to the illustrious and long suffering house of Bourbon.”