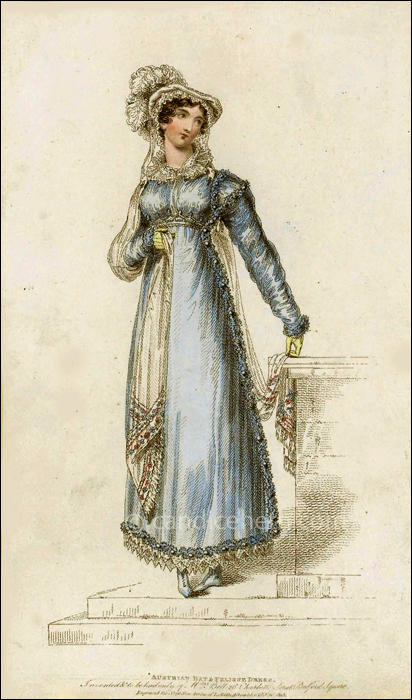 Though this is called a “pelisse dress,” there is actually a dress underneath. But it is almost entirely covered by the pelisse, or coat dress. It appears that it was worn as a dress, not an outer garment, and was not easily removed when going indoors, for example, as a normal pelisse or other outer garment would have been. The underdress has pointed lace at the bottom edge, to be seen below the hem of the pelisse, but was otherwise likely a simple muslin slip.

“The pelisse dress is made of the finest French blue cloth, in a style of exquisite and tasteful novelty which description cannot pourtray [sic]; our readers may conceive some ides of the form of the dress from our Print. A trimming of the most novel description, composed of small silver buttons inserted in silk tufts, finishes it in a most original and tasteful style. The sleeve is ornamented in a manner extremely new and striking. A lace shirt, the collar of which falls over, displays the throat partially; and the flounce of the under-dress, which is of fine pointed lace, being just seen under the cloth, adds to the light and beautiful effect of the whole. Head-dress the Austrian bonnet, composed of white moss silk, and superbly ornamented with white feathers, which is worn over a small French mob. The whole dress has enough of the foreign air to be what the French term imposant, which at the same time we must allow it to be the most exquisitely becoming costume that has ever fallen under our observation; the face and figure most be homely indeed that would not, to use a feminine phrase, be set off by the Austrian walking dress. Blue kid gloves, and half boots to correspond.

“The above dresses [including this one] were invented by Mrs. Bell, Inventress of the Ladies Chapeau Bras and the Circassian Corsets, and of whom only they can be had, at her Magazin des Modes, No. 26, Charlotte-street, Bedford-square,”