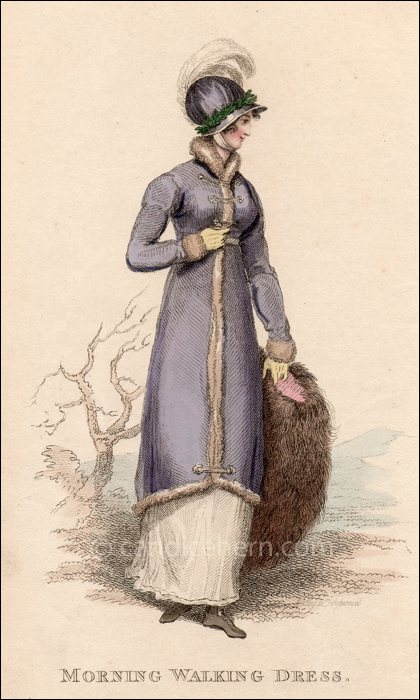 “Short pelisse of deep lilac, shot with white; back broader than they were worn last month, and on each hip a Spanish button. It is made with a collar up to the throat, and trimmed round with rich fur; sleeves long and loose, with a fur at bottom to form a cuff, rather shorter in front than behind, and two Spanish buttons are placed just at the bottom of the pelisse in front, which fastens with a loop crossing from one to the other. The bosom is ornamented in the same manner; a belt of embroidered ribband round the waist, and a gold clasp in front. A bonnet of the same materials as the pelisse, crown a helmet shape, front very small, and a wreath of laurel round it; three white feathers are placed at the back of the bonnet, and fall over the front; broad ribband, same as the bonnet, is pinned plain under the chin. The hair is brought very low at the sides, and a single curl on the forehead. Buff gloves, and dark brown kid boots. Large silver bear muff.”