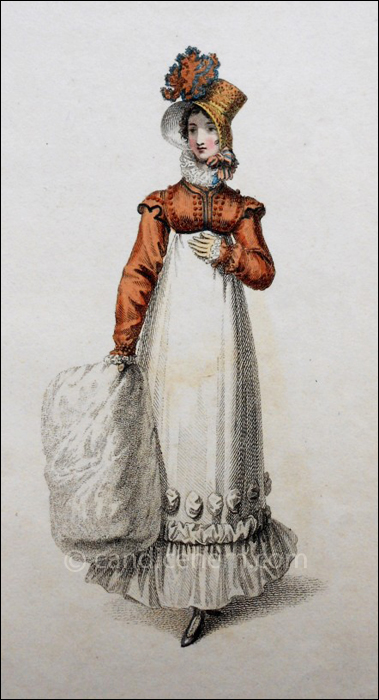 “Cambric muslin high dress, the lower part of the body made full, and the upper part, which is tight to the bust, composed entirely of rich work. A row of pointed work forms a narrow pelerine, which is brought rather high on the bosom, and ends in a point in front. The bottom of the skirt is finished by a deep flounce and heading, composed of the same material, which is surmounted by a row of soft muslin bouffone let in at small distances from each other. Over this dress is worn a spencer, composed of gros de Naples, ornamented with figured buttons, which are intermixed with a light, novel, and elegant trimming. For the form of the body, we refer our readers to our print. The sleeve, of a moderate width, is finished at the wrist to correspond with the body, by a double row of buttons and trimming intermixed. The epaulette, of a new and singularly pretty form, is edged with trimming, and finished with buttons on the shoulder. Autumnal bonnet, the front rather large, and of a very becoming shape; the crown low: it is tied under the chin by a large bow of ribbon. We are interdicted from describing either the novel and elegant materials of which this bonnet is composed, or the ornament which finishes it in front. Swansdown muff, lilac sandals, and pale lemon-colour kid gloves.

“We have been favoured this month with both our dresses by a lady, one of our subscribers, who purchased them, we understand, at Mrs. Bell’s in St. James’s-street.”