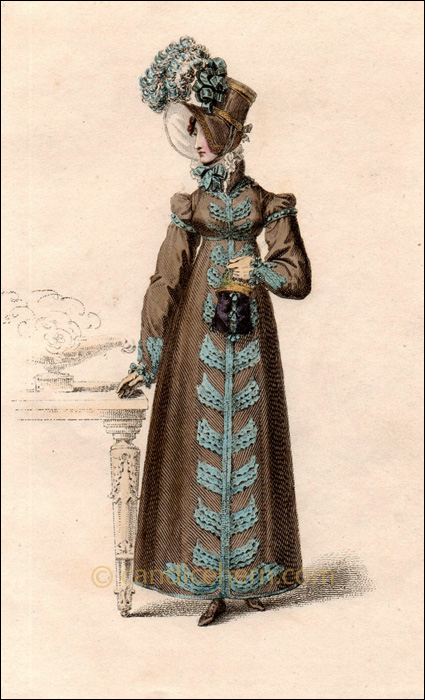 “A fawn-coloured poplin round dress: the body is of a three-quarter height; it is cur byas and has no seam, except under the arm. The back is narrower than last month; the fronts just meet, but do not cross; the sleeve is long, rather loose, and confined across the wrist by a satin piping disposed in waves; they are about two inches in length, and are finished by a small silk tuft at the end of each wave. The bust is trimmed to correspond, and the skirt is finished round the bottom by three rows of satin pipings, which form a deep wave, and which are also finished by tufts.

“Over this is worn a pelisse composed of fine fawn-coloured cloth, and lined with white sarsnet. The waist of the pelisse is of a moderate length, the body is tight to the shape, and it has a small standing collar. The trimming which goes down the front, and finishes the bottoms of the sleeves, is extremely tasteful; it is an embroidery composed of intermingled blue ribbon and chenille, which ha a very striking effect. The sleeve is rather wide, except at the wrist, and is finished by a half-sleeve in the Parisian style; that is to say, very full on the shoulder, and confined across the arm by a row of small silk buttons. Head-dress, a bonnet composed of satin to correspond with the colour of the pelisse, lined with white sarsnet, and elegantly ornamented with a light embroidery in straw. For the shape of the bonnet, which is singularly becoming, we refer our reader to our print: it is trimmed with blue satin ribbon and a large plume of feathers. Limerick gloves, and half-boots composed of fawn-coloured kid.”