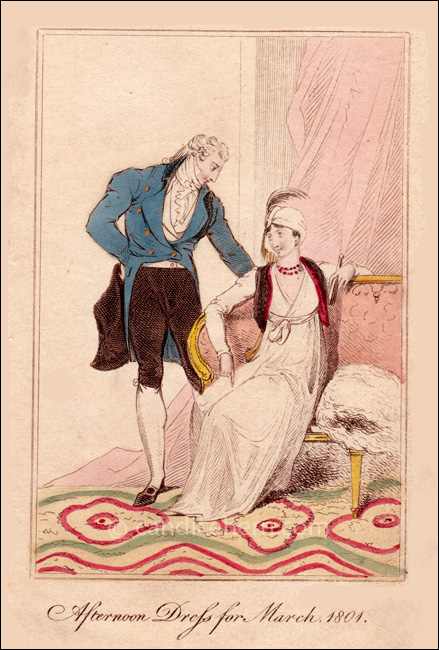 This print is a rare example of a male figure included  in a fashion print from this magazine. It is the only one I’ve ever come across. Sadly,the description does not give us any information about his afternoon ensemble.

Though it is difficult to see online, there are bits of gold metallic paint throughout: the buttons on the gentleman’s coat, the fringe on the end of the lady’s turban, and a bit hanging (on her right) from the sash at her waist. The metallic accents were often used in the early years of this magazine, no doubt in hopes of competing with the much more upscale and expensive Gallery of Fashion, which was famous for its use of metallic accents in its prints. Though this print is certainly charming, it is not in the same league as the Gallery of Fashion prints.

“3. A white muslin train gown, with long tight sleeves; the waist bound by a fine muslin sash, the ends of which are fringed with gold. Over this dress is worn the Turkish or Tunisian vest, made of black velvet, lined with pink sarcenet, and hanging loosely from the shoulders. Necklace or coral, or gold beads. Turban of fine muslin, with a falling end fringed with gold; Bird of Paradise feather. fan of black crape, spangled with gold.

“Dress caps of pink crape, trimmed with white lace, and hats of lilac or light blue velvet, with a single feather, and deep white lace veil, are much worn.

“Pink or lilac crape robes, trimmed with broad black or white lace, are much in vogue.

“Half pelisses of scarlet velvet, trimmed with deep white lace, are very fashionable.

“Purple, blue, pink, and scarlet ae the most universal colours. Deep black and white laces are the general rage.

That’s it. Nothing about the gentleman’s ensemble. But he appears to be wearing a double-breasted blue coat, white ruffled shirt and neckcloth, black beeches, white stockings, and black buckled shoes. He is carrying what looks to be a bicorn hat.