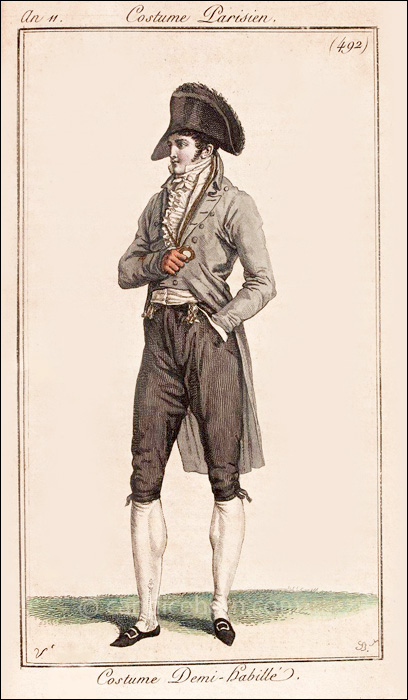 I am a big fan of the artist of this print, Carle Vernet, as his beautifully painted, very realistic depictions of clothing give us an idea of what it might actually have looked like on a real person, rather than the idealized depictions of most fashion prints. He was a master of drapery, showing how fabrics fell, draped, bunched, or wrinkled. Here, for example, we see breeches that are baggy at the groin and knee, which is indeed how breeches fit. (They were also baggy in the rear … not at all sexy!) We also see here stockings that bag at the ankles.

This young man is dressed in the height of fashion. The magazine notes that the style is less exaggerated than in previous years, but gives no other details of this ensemble. He wears a bicorn hat, a double-breasted gray tail coat, short white waistcoat, ruffled white shirt, white neckcloth, dark striped breeches, tied instead of buckled, white clocked stockings, and buckled shoes. He also wears two sets of fobs at his waist, and a gold quizzing glass hangs from a chain around his neck.

Note the buttons on his coat that go all the way to his shoulder, with multiple buttonholes on the lapel. I suspect this was a very French style, as it is not typically seen in British prints and paintings of the same period. His high shirt points are typical of young men at this time, and his neckcloth is beautifully tied.

Just as with women’s half dress, gentleman’s half dress (Demi-Habillé) would have been worn in the late afternoon and early evening, but not for a formal evening event.