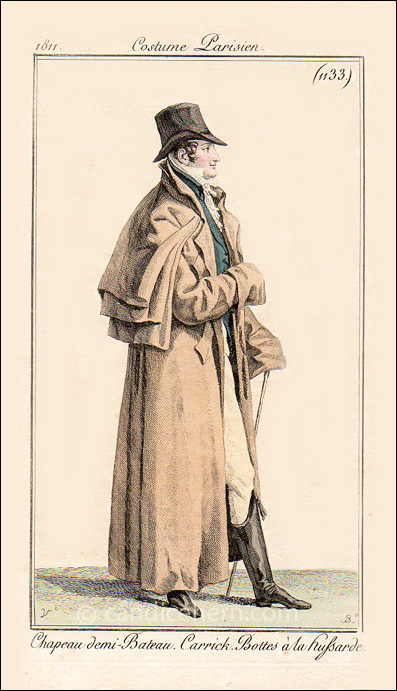 This print is an excellent example of the multi-caped greatcoat so popular with gentlemen during the Regency. It was an English style, adopted by the French. (Even the term “carrick” was adopted by the French from the English term “garrick,” which was a caped coachman’s coat.) The greatcoat was a long overcoat, sometimes three-quarter length, but most often full length, almost reaching the ground. During the Regency period, it was fashionable to have capes attached to the shoulder of the greatcoat. Here we see only three capes, but in period sources we read of dandies and fops wearing as many as ten capes. Extant examples show the capes as removable, and the  capes in this print do appear to be so. The greatcoat was typically made of wool, and was most often worn for driving, or for walking in inclement weather.

The over-long sleeves, with cuffs hanging well below the hand, is a French affectation, based on the exaggerated styles of the Incroyables, ie the young men of fashion.

The boots are the style known as Hessians in England, here identified with the Hussars. The Hessian boot rises up in front to a sort of soft point, from which hangs a tassel. Beau Brummell was famous for his gleaming black Hessian boots, said to have been polished with champagne.

The artist, who signed the print, is Carle Vernet. He provided paintings for this publication from 1799 through approximately 1811, so this is one of his last prints for le Journal des Dames et des Modes. His are among my favorite of the prints from this magazine.

Those of us who have written books set during this period have often mentioned a man wearing a greatcoat. But the great Georgette Heyer put one on almost all her heroes, at one time or another, eg:

“He had put on his greatcoat, an affair of buff-colored cloth, with three capes at the shoulders.”
– Lord Vidal in Devil’s Cub

“[The voice] belonged to a gentleman who drove a team of blood-chestnuts, and wore a greatcoat of fifteen capes.”
– Lord Worth in Regency Buck