Fashions of London and Paris, October 1798. 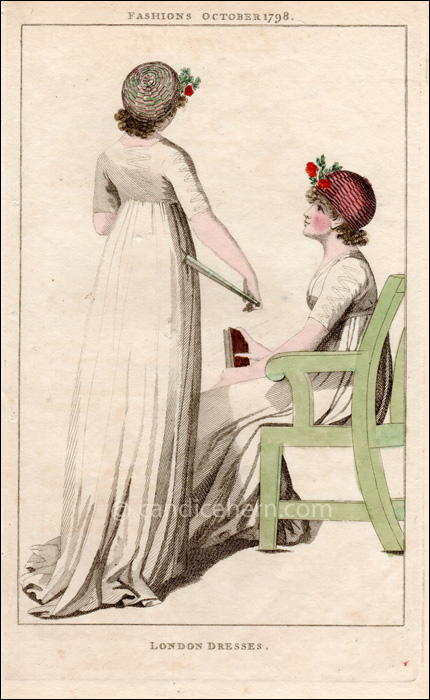 The title in the magazine’s description of this print says LONDON FULL LENGTHS. That designation simply designates it from “Half-Lengths” that depict a figure from the torso up, and the prints of hats, showing just the head.  Nowhere, however, does it define the type of dress shown in the print.

Because the hats appear to made of straw, I am guessing that they weren’t worn for evening. And because there is no outer garment shown, as it would be for a walking dress, I am designating these dresses as Afternoon Dresses, worn at gatherings in the late afternoon and early evening. The chair appears to be an outdoor chair, so perhaps the ladies are shown at a garden party or other outdoor afternoon event.

Each figure appears to be wearing the same dress, so that professional and home seamstresses could see multiple views as they attempted to replicate the style.

The print is described in the magazine, very briefly, as follows:

“The hair combed quite strait all over, very low on the forehead, the end curled.–LEBRUN’S patent coloured hats, crimson flower in front. Robes of white muslin, short close sleeves, the back and sleeves laced with narrow ribbon. LEBRUN’S hats are made in all colours and shapes: those represented are the most favorite.”