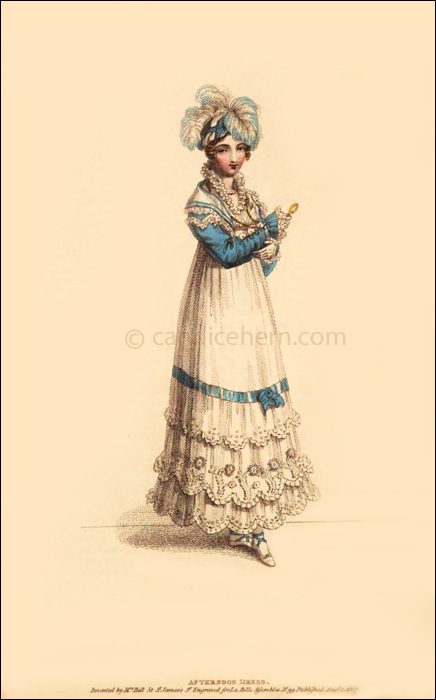 An afternoon dress might have been worn for the fashionable promenade in Hyde Park in the late afternoon, or for a garden party or other entertainment held late in the day, before evening.

Note that the model is holding a gold quizzing glass on a gold chain. And aren’t the slippers with the blue ribbon laces adorable?

“Round dress of fine plain India muslin, with triple flounces richly embroidered; the upper flounce finished with a bouilloné run through with ribband of etherial blue. Open spencer of etherial blue sprigged satin, lined with white; the part that turns back and the falling collar elegantly finished with fine blond mancherons of white satin surmount the sleeves, trimmed also with blond. Elphinstone cap of blue and white satin, with a plume of white feathers.”

In the General Observations on Fashion and Dress, after extolling the stylish inventions of Mrs. Bell for her clients heading out of London for the summer, it states: “The head-dresses invented by Mrs. Bell display a versatility of taste which is only equalled by their peculiar elegance. The Elphinstone cap, the same as that represented in our Print, is of various colours according to the different complexion of the wearer.”

I am not certain who the cap is named after, but perhaps it is Miss Margaret Mercer Elphinstone, an heiress and close friend to Princess Charlotte, who had a month earlier married Count Flahaut. According the the marriage notice in this magazine, apparently all the world was aware of the difficulties of their courtship. The count had been an aide-de-camp to Napoleon, and Margaret’s father, Lord Keith, was an admiral who’d been in active support of British troops fighting against Napoleon in Spain and Portugal. The romantic attachment between the couple, however, was too strong to be denied, and many family members and prominent society figures supported their cause, so that in the end Lord Keith gave his consent. It is a romantic enough story to have perhaps inspired a stylish cap!