Eyeglasses as we know them today, with side pieces that rest on the ears, were invented in 1727 by an Englishman named Edward Scarlett. Until that time, reading aids were often perched precariously upon the nose or were hand held. A “quizzing glass” was a single magnifying lens on a handle which was held up before the eye to enable closer scrutiny of the object in view. The quizzing glass is not to be confused with the lorgnette, which has two lenses, and more often than not a correctable (prescription) lens rather than a simple magnifier. A monocle is also a single-lens device but is meant to fit into the eye socket and therefore does not have the longer handle of the quizzing glass, which was held in front of the eye.

The earliest examples of single-lens hand-held reading devices date back to the 12th century and were simple affairs with bone or brass handles used by scholars and clerks. It was not until the mid-18th century that they developed into a fashionable accessory, designed and worn as a piece of jewelry.  The quizzing glass in Figure 1 is the oldest in my collection, dating to around 1750. It is 3″ long, made of cut steel, faceted and polished to resemble gem stones, and has an unusual heart-shaped handle. The facets and the edge of the glass are surrounded by fine beading. The circular handle is rigid, which is typical of early quizzing glasses. Later, the handle would be made to swivel.

The quizzing glass generally dangled at the end of a long ribbon or chain around the neck and was held up to the eye to “quiz” (stare, glance, look at quizzically) people and objects. The wearer would sometimes glare at a person through his or her quizzing glass as a manner of set-down or mockery. 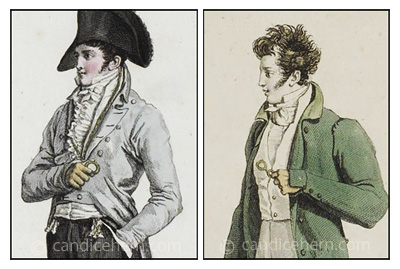 The term “quizzing glass” came into use toward the end of the 18th century. It is sometimes assumed that quizzing glasses were used only by men as they are most often associated with fashionable dandies of the Regency and Victorian eras, such as the two gentlemen shown in Figure 2 (from French fashion prints of 1803 and 1813) . However, the fashion prints of the Regency show ladies wielding them with as much aplomb as Beau Brummel. And those ladies are not the elderly dowagers one might imagine using such a device, but fashionable young women. Figure 3 shows young women wearing quizzing glasses in fashion prints from 1801, 1807, 1812, and 1816.

In fact, the quizzing glass is such a common feature in fashion prints throughout the period that it must be assumed it was an extremely popular accessory. Most prints and portraits of women wearing quizzing glasses show them on a long gold chain around the neck. Men are frequently shown with a quizzing glass on a black ribbon, though gold chains are also used. 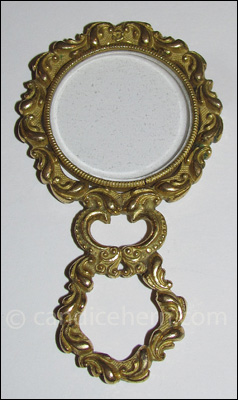 A quizzing glass was as much a piece of jewelry as it was a functional vision aid. They were made of gold, sterling, pinchbeck, and other base metals. Later, in the Victorian era, tortoiseshell became a popular material for quizzing glasses and lorgnettes.

Quizzing glasses were sometimes quite elaborate in design. Treated as jewelry, they often came in their own special cases, either of leather or shagreen.

The quizzing glass in Figure 4, c1790, shows an elegant flourish design in pinchbeck. (Pinchbeck, invented in the 18th century by Christopher Pinchbeck, was a form of brass made of an alloy of zinc and copper, mixed in proportions to resemble gold. It was a common jewelry element of the period,) The flourishes of the lens surround are cut upon a fine cross-hatched ground and culminate in a tiny flower at the top of the lens. An inner ring of twisted rope design holds the glass. The rigid handle echoes the decoration of the lens surround. Even though this piece is not made of gold, it was nevertheless an elegant piece of jewelry, and not simply a pedestrian reading aid. 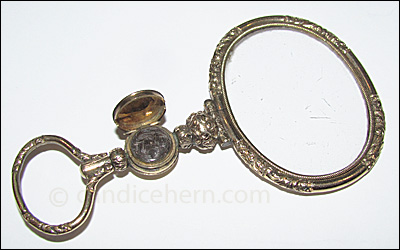 The handles of quizzing glasses often show the most inventive design. They might be jeweled, or hold secret vinaigrettes or lockets. In Georgette Heyer’s The Talisman Ring, a family heirloom ring was hidden in the handle, or the loop end, of a quizzing glass. The chased gold quizzing glass in Figure 5, c1815, has a secret locket built into the handle. It opens up to reveal a lock of woven hair under glass. (This is one of my personal favorites, and the only one I ever wear.)

Beginning around 1800, the quizzing glass handle or its loop was often swivel-mounted to make it easier to lay flat when hung from a chain. All the quizzing glasses shown in Figures 5, 6, and 7 have swivel handles. 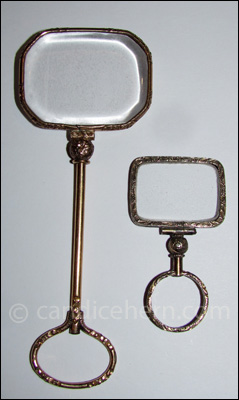 Though the lenses were generally standard sizes, either round or oval, the handles were of varying lengths. Of course, the longer the handle, the more delicious the set-down. The quizzing glasses shown in Figure 6 are the longest and shortest I own. The longer one, a chased gold example c1820, is 4 ¼” long. The tiny one, a sterling silver example c1830, is only 1 ¾” long.

Quizzing glasses were almost always set with a magnifying lens, though some may have been set with a corrective lens since fashionable ladies and gentleman did not like to wear spectacles in public. The glass would have been obtained from an optician, but the lens was set in a frame provided by a goldsmith or jeweler. Several in my collection are set with plain glass, which implies they were simply decorative and not functional as a visual aid. They would still, of course, have been effective tools for a set-down or a gesture of disdain.

The quizzing glasses shown in Figure 7 date from between 1800 and 1815 and are typical of the style used during the Regency. Each is between 2 ½” to 3″ long, has a swivel-mounted loop handle (except for the one on the far right, which is rigid), and is set with a magnifying lens. All are gold, except for the fourth one, which is sterling silver. These would have been used by either men or women.

Quizzing glasses reached a peak of popularity during the first two decades of the 19th century. Around the 1830s, lorgnettes became more popular for women. Quizzing glasses continued as a fashionable accessory for gentlemen through the beginning of the 20th century when monocles supplanted them in popularity.