Click on images to see larger versions and to read more detail about the individual vinaigrettes.

We often read about overwrought ladies reaching for their vinaigrettes, or of stalwart heroes reviving a swooning damsel by waving a vinaigrette beneath her nose. Hackneyed as these scenes may sound, they ring quite true in an historical context.

Vinaigrettes, popular from the late 18th century through the mid-19th century, were small containers used for holding various aromatic substances, usually dissolved in vinegar. A tiny piece of sponge, soaked in the liquid, was contained beneath a grill or perforated cover. Figure 1, dated 1812, shows a tiny shell-shaped vinaigrette closed and open to display the engraved and punched grill. Figure 2, dated 1799, shows a monogramed vinaigrette closed, open to show the simple punched grill, and with the grill raised to show the sponge. By far the most common form of vinaigrette during the Regency was the sterling silver box, and that is the only type represented in this collection.

One of the ancestors of the vinaigrette was the pomander, which can be traced back at least as far as the Middle Ages. Pomanders were generally gold or silver, often studded with jewels, and were pierced to allow the fragrance of the costly solid perfume or aromatic inside to be dispersed. Unlike liquid perfumes that were often valued for their erotic qualities, the substances contained inside pomanders were valued more for their medicinal and protective powers against plague and other diseases. Pomanders were generally spherical, often in the shape of fruit, and were most often worn suspended from a chain, as a piece of jewelry. 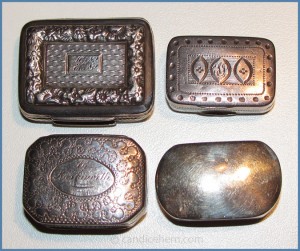 In those days of rampant disease, an orange was often considered a safeguard against infection. Its skin was saved and wrapped around a vinegar-soaked sponge and carried in the hand. Henry VIII’s advisor, Cardinal Wolsey, is said to have been in the habit of carrying such an orange. At the Tudor court, however, the aromatic orange was supplanted in popularity by the pouncet box, the more direct ancestor of the vinaigrette. Particularly favored by the King himself, the pouncet box was a flattened sphere of gold or gilded silver with a pierced lid. Inside was a sponge soaked in aromatic vinegar. It was usually hung from the waist with a silk cord or gold chain. During the reign of Elizabeth I, the elegant use of the pouncet box, to inhale its sharp fragrance, became as ritualized a social grace as the taking of snuff some centuries later. 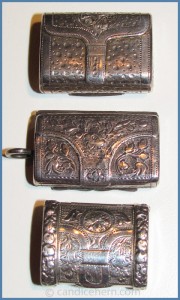 The pouncet box and its variations (the sponge box, the smelling box, the essence box) remained in use through the 18th century. During the 1770s, more powerful aromatic vinegars were developed, with a strong acetic acid base and concentrated perfumed oils. The intensity of the aromatics resulted in a drastic reduction in the size of the containers which held them, now called aromatic vinegar boxes. The term vinaigrette came into general use during the 1780s.

The vinaigrette was used by both men and women at this time, though by the 1820s it was almost exclusively a feminine accessory. Carried in a pocket or reticule, or suspended from a chatelaine at the waist, it was used to mask unsanitary odors and for direct inhalation of its restorative vapors. Since one never knew when emotion or tight lacing would overcome one, the vinaigrette needed to be near at hand and its aromatics quickly accessible. The hinged lid allowed it to be flipped open, like a snuff box, with the flick of a finger. 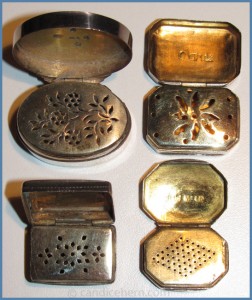 Compared to its larger and heavier ancestors, the vinaigrette was a tiny, delicate box. The largest in my collection measures only 1 ¾” across. The smallest measures ½” across.

Approximately 90% of all English silver vinaigrettes were produced in Birmingham. The sterling interiors were gilded to prevent discoloration from the acetic acid, which did not affect gold. Though most vinaigrettes were alike in construction, the silversmiths used all their decorative skill to set one apart from the other. When one considers the minute dimensions of the vinaigrette, those skills are impressive indeed.

There were simple, elegant, undecorated exteriors. Others had chased, engraved, engine-turned, or applied cast decoration. Figure 3 shows a variety of lid decorations, including one undecorated lid.  A great many of them were monogrammed (all three of the decorated lids in Figure 3 are monogrammed), sometimes with the initials of both the giver and recipient in a presentation inscription. The lids were sometimes decorated to commemorate important events, eg the death of Lord Nelson in 1805. By the 1830s it had become fashionable to depict specific houses or churches or other famous structures on the lid through engraving or press-embossing.

Not all vinaigrettes were shaped as simple ovals and rectangles. Various novelty shapes were popular, especially the wallet or satchel (see Figure 4) and the shell (see Figure 1). They also came in the shape of books, nuts, eggs, watches, crowns, hearts, etc. Regardless of shape, the typical vinaigrette of the English Regency period was hinged and opened to reveal a grill.

The grills display as much diversity of decoration as the exteriors. The earliest vinaigrettes often have only a simple punched grill (see Figure 5). During the Regency the grills became more elaborate (see Figure 6) with intricate scrollwork, flowers, foliage, or other complex decorative designs. Another popular type of grill was the filigree or wirework design. (See Figure 7.)

Though my own vinaigrette collection is exclusively silver (I appreciate the ease of dating via the required hallmarks), other materials were also used, including gold, and some were even decorated with jewels. After 1820, the lid might be made of polished agate, carnelian, onyx, or other stone.

Vinaigrettes reached their peak of popularity during the Regency, and often became incorporated into other objects, like scent bottles, snuff boxes, and jewelry. I have a ring and a quizzing glass that include vinaigrettes.

By the 1840s, vinaigrettes had declined in popularity, being associated with matrons and dowagers. They continued to be incorporated into Victorian double-ended scent bottles, but by mid-century, the charming little silver boxes had become a relic of past generations.