During the 18th and 19th centuries, scent bottles were beautiful and often expensive flasks available primarily to women of means. They might make their own scents or have them blended specially for them by perfumers, and then decant the fragrance into their favorite containers.

In the late 18th century, perfume became available to the masses when perfumers and chemists began selling or giving away as samples tiny amounts in inexpensive, disposable containers. These simple, naïve bottles came to be known as “throwaways” since they were generally tossed out when empty. They were the equivalent of the tiny sample vials of fragrance often given away at cosmetic counters today. Though the old throwaway containers were much bigger, the tiny amount of fragrance they held was comparable to today’s sample vials. Throwaways were primarily made in England and Bohemia, and were used from the late 18th century through the end of the 19th century. Besides acting as sample vials for perfumers, they were also given away at fairs and spas. You will sometimes hear them referred to as “attar bottles”, “Oxford lavenders”, or “teardrops” (Figure 1). 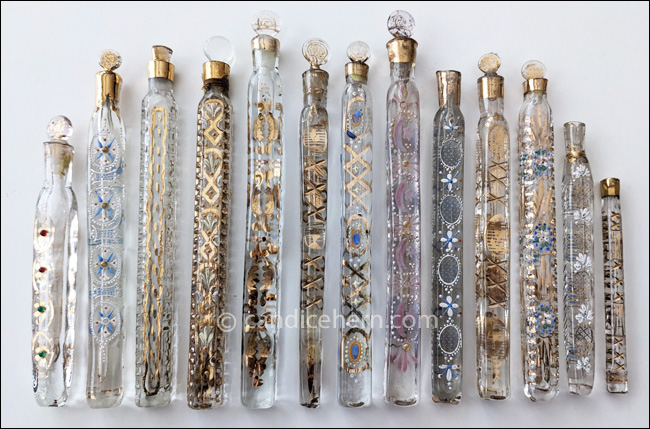 Throwaways are larger than you might think. In the group above, the largest is just over 8″ long. The most common size seems to be between 6″ and 8″. 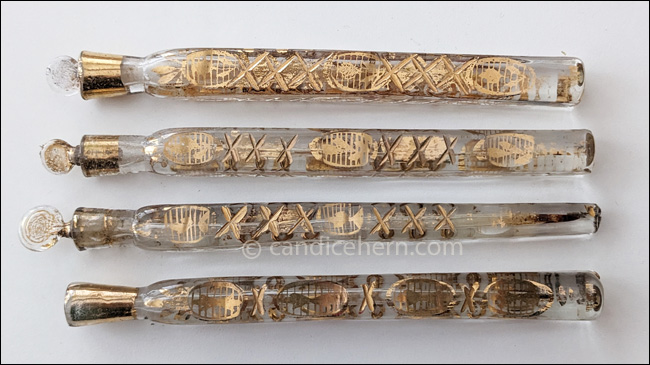 The throwaway bottles were made of glass — usually clear, though sometimes colored glass, especially amber or dark green — and were decorated with hand-painted gilt and enamel. The most common decoration was alternating gilt cross-hatching and simple gilt striped oval shapes painted in the recessed “thumbprints”. (See Figure 2.) Both the cross-hatching and the “thumbprints” were molded or carved into the glass, with the decoration following those shapes.This style continued throughout the 19th century, making this style difficult to date. The gilt decoration is often very crude on this simple style of bottle, indicating they were produced quickly and inexpensively. They were likely the types of bottles given away at spas and fairs. Perhaps because they were more common, ie more plentiful, this style of bottle is the type most often found in antique stores or online auctions. 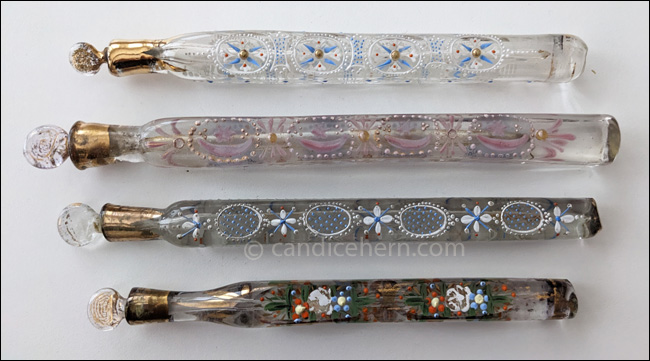 The most beautiful throwaway scent bottles have colored enamel decoration, often using the same basic “thumbprint” style as the simpler ones, but with more intricate colored designs in and around the oval shapes, which are more often painted on flat glass than molded into a recess.  (See Figure 3.) The decoration might also include applied tiny beads, or half-beads, in the design, as in the top two examples. The bottles will generally have the full decoration on the top and bottom of the bottle, as it lays flat, with a simpler decoration on the two sides.There is no carved or molded cross-hatching on these bottles, and the decoration is often unique, so they don’t have the look of the more common bottle as shown in Figure 2.

Sometimes the decoration relies more on gilt painting than colored enamels, though with more elaborate designs than the simple gilt decoration shown above in Figure 2. The bottles shown in Figure 4 use gilt painting as well as colored enamels, though the gilt is the primary element, creating a very lush, sparkling design. None of these examples show the recessed “thumbprint” design, but are instead painted on flat glass. This gives the decorator more leeway to become inventive, resulting in some very unique and beautiful designs. Bottles with more elaborate and unique designs, as in Figures 3 and 4, would likely have been provided by upscale perfumers and other merchants rather than given away as fairings or spa souvenirs.

One somewhat rare variation is the spiral-twist bottle. (See Figure 5.) The undecorated bottles would have been more expensive to produce than the simple square-cut cylinders, and the decoration on these spiral-shaped bottles is typically of a high quality as well. In these examples, the traditional “thumbprint” oval has been incorporated into the painted design on the spiral. These spiral bottles must have been among the most desirable, and would certainly have been provided by only the best perfumers. Yet, just as with all the others, these beautiful bottles were meant to be disposable!

Throwaway bottles are long and slender, their size and weight well out of proportion to their capacity. The scent is contained in a tiny tear-shaped cavity, which you can see in the close-ups of these bottles (Figure 6): 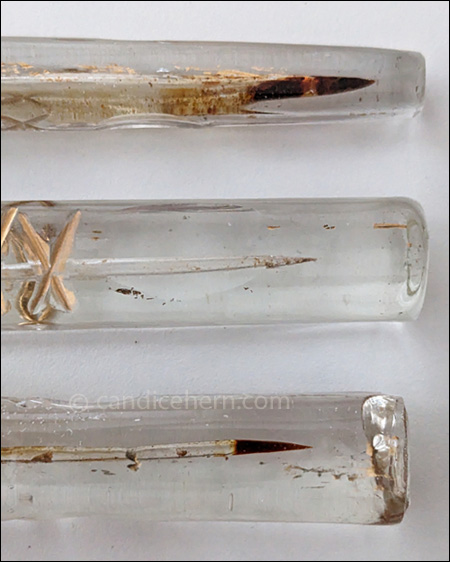 Sometimes the scent cavity is so tiny it only reaches the midpoint of the bottle, leaving the lower one-half to one-third solid glass (hence the weight).

Occasionally a bottle will still have remnants of liquid fragrance in the bottom of the teardrop, as you can see in Figure 6. The bottle shown in Figure 7 still contains a full reservoir of dark liquid scent, and shows the teardrop cavity very clearly.

When throwaway bottles were purchased they came with glass stoppers ground to fit, and were generally sealed with wax. The top was then covered with a square of waxy paper and tied with string, all to protect the stopper and the contents. The bottle shown in Figure 8 still retains the remnants of its original paper and string. 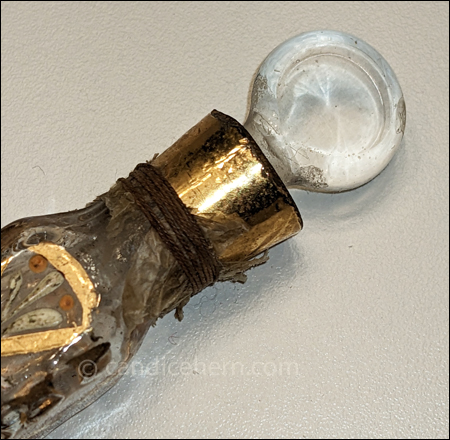 I  have been intrigued by these scent bottles for years and even though they were meant to be tossed out when empty, I am glad that many were not! These were not dressing table items; they do not stand up, and are often called “laydown” bottles.  I imagine they would have been tucked into a pocket or reticule, even though some of them are quite heavy.

For more information on scent bottles, see these sources: