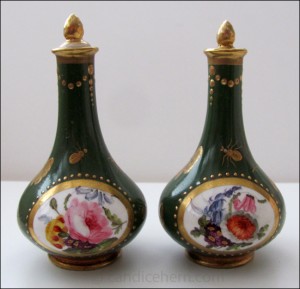 Porcelain scent bottles were extremely popular throughout the second half of the 18th century. The charming “toys” made at the Chelsea factory were especially popular, produced in the shapes of various figures, animals, fruits, and other objects. Even while the craze for these charming items flourished, there was another more formal style of porcelain scent bottle that continued in popularity in England and on the continent. These were small pear-shaped bottles with long necks, often with metal mountings and an attached flip-back lid with a stopper inside. The porcelain examples imitated similar bottles produced in silver or glass.

This shape became more streamlined and simple in the late 18th and early 19th centuries, and was produced primarily by the Derby factory, the successor to the earlier Chelsea factory, and sometimes by Spode. These long-necked Derby scent bottles are featured in this collection. 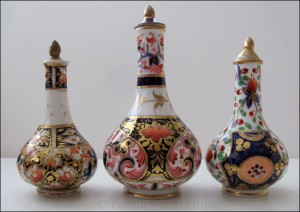 The decoration on the scent bottles is in keeping with other larger pieces being produced by Derby at the time, mostly hand-painted with some underglaze blue in the Japanese-inspired designs, and much gilt overpainting.The floral painting on the two bottles shown in Figure 1 and the middle bottle in Figure 3 is especially fine for such small pieces. The Imari-inspired designs in Figures 2 and 3 were extremely popular on early 19th century wares.

All painting was done by hand, which accounts for variations in bottles using the same pattern. For example, the two bottles in Figure 1 are decorated in essentially the same pattern, though the central floral designs are different, and the insects over-painted in gilt on the green ground are placed slightly differently. It is interesting to note that although this looks like a matched pair, they were actually made at different times. The one on the left has a Derby mark dated 1770-1782, and the one on the right has a mark dated 1800-1825. Clearly the same design patterns were still being used. 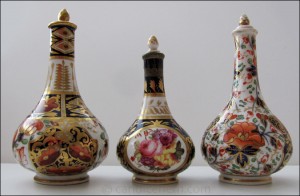 Each of the bottles shown is marked. The bottle on the left in Figure 1 and the middle bottle in Figure 3 have the 1770-1782 mark, and all of the bottles with Imari designs in Figures 2 and 3 have the 1800-1825 mark. The two sizes — just over 3″ tall and just over 4″ tall — seem to be standard, at least for those manufactured by Derby.  The stoppers are original to each (and the fact that they survived is rather extraordinary — similar Derby bottles in the Victoria & Albert Museum are missing their stoppers).

Porcelain scent bottles were meant for display, and these bottles would have stood proudly on a lady’s dressing table. They did not come with perfume inside. Liquid fragrance was purchased separately and then decanted into one’s favorite bottles.

For more information on porcelain scent bottles, see these sources: