Buckles were worn on shoes as early as Medieval times, but they fell out of fashion and did not appear again until the mid-17th century.

Throughout most of the 17th century, shoes — especially men’s shoes, more on display than women’s shoes which were partially hidden by their long skirts — were ornamented with elaborate ribbons and bows. When buckles came into fashion, it was thought significant enough to be noted by Samuel Pepys in an often-quoted diary entry for 22 January 1660: “This day I began to put buckles on my shoes.” Their use among all classes did not become widespread until the 1680s. By 1720, shoe buckles were in universal use, except for the very poorest classes.

Buckles were made to be attached to the shoe’s two straps, or latchets, securing them over the instep. A pitchfork-shaped double prong, called a tongue, fastened one latchet, and two short spikes on the loop, or chape, attached the anchoring latchet. This tongue and chape mechanism was often made of the same material as the buckle base, eg sterling for the more expensive buckles, but was also made of steel. Shoe buckles were sold separately from the shoes, and were meant to be transferable from one pair to another. They were treated like jewelry and kept in special cases to protect them. (See  Figure 2.)

Every sort of material was used for buckles, the most common being copper alloy and gold-colored pinchbeck. Most fashionable were sterling silver buckles. 18th century trade cards and advertisements show that many jewelers and silversmiths specialized in shoe buckles. 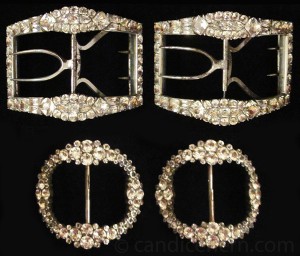 During the 1720s, shoe buckles began to get larger, and continued to increase in size until the late 1780s. Buckles reached their peak of glory from 1760-1780, both in size and style. Men’s shoes of this period became lighter and more elegant, with all stylish invention and adornment channeled into the buckle. It was during this period that matching sets of buckles for shoes and knee breeches began to be seen, as in the second set seen in Figure 2, above. Women followed men in their pursuit of elegant buckles. It is sometimes difficult to tell if a pair of buckles was meant for a man or a woman, though many women’s shoes of the period could not have managed the huge buckles that came to worn by men, and a smaller buckle can usually be identified as a lady’s buckle. In some cases, I suspect the same buckles might have been worn by either a man or a woman.

From the 1740s buckles began to be seen with real and paste stones. Though diamond shoe buckles were worn (a beautiful pair can be seen at the Victoria and Albert Museum in London), it was a rare extravagance. Other materials came to be used in imitation of the brilliant sparkle of diamonds, most especially facet-cut polished steel, marcasite, and paste. All buckles in this collection are set with paste stones. 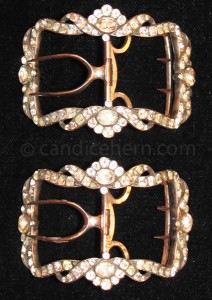 Figure 4: Ladies’ shoe buckles, c1770. Click on image to see a larger version and to read more detail about the buckles.

Paste, which is a heavy high-lead glass, is more easily cut and shaped than diamonds, and could be close-set without the visual intrusion of metal settings, creating a mass of sparkling brilliance. They could be cut and set into any shape or size. This necessitated a higher degree of setting expertise, and paste craftsmen were often more highly skilled than those working with diamonds. (Figure 3 shows exquisite workmanship with very closely place stones.)

18th century paste is always foil backed, which increases the brightness and sometimes provides color. The settings must be air-tight to prevent corrosion to the foil, which can cloud the brilliance and ruin the stone. The foil backs acted as mirrors, significantly increasing luminosity. Sparkle was the chief concern.

The 18th century attitude toward paste was not the disdain of later periods. Paste was appreciated on its own merits, and was not intended to simulate or counterfeit diamonds. Good paste jewelry was worn in the highest circles. Some of the most exclusive jewelers, even those with royal warrants, advertised paste jewelry. The demand for paste was so great that the government decided to tax it. 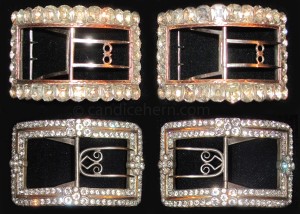 Figure 5: Large Artois buckles c1780. Click on image to see a larger version and to read more about the buckles.

Paste shoe buckles, which glittered magnificently in the ballrooms under the candlelit chandeliers and sconces, were fashionable formal wear for both men and women. It is said that gentlemen of the dandy or Macaroni set were particularly fond of paste buckles as their sparkle served to highlight their skill and grace on the dance floor. Shoe buckles increased in size through the 18th century, reaching massive proportions in the 1770s with the Artois buckle, named after Louis XVI’s brother, the Comte d’Artois, who was at that time ambassador to England (and who would later reign as Charles X of France). A young man of fashion, he is credited with popularizing the new style of large buckles that were deeply arched over the instep, and were sometimes so heavy they quickly wore out the latchets on the shoe. The Gentleman’s Magazine of 1777 reported “the Artois shoe buckles are becoming universal for ladies and gentlemen: the size of some worn at Court are enormous.”  In that same year, the character of Lord Foppington in Sheridan’s comedy, A Trip to Scarborough, says that whereas buckles used to be worn to keep the shoe on, “the case is now quite reversed and the shoe is no earthly use, but to keep on the buckle.” (See Figures 5 and 6.) 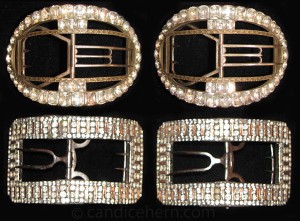 Huge shoe buckles stayed in fashion for almost a decade. The Glass Excise Act of 1777 created a levy on “all Paste Glass, 18s 8d for every cwt.”

By the 1790s shoe buckles were falling out of use, surviving for the next few decades only in ceremonial and Court dress. The change in the style of women’s shoes, in particular, had a role in the decline of shoe buckles. The flat-heeled slipper that became popular in the 1790s and remained in style for many decades could not bear the weight or the size of a large buckle. By 1791, it is reported that 20,000 buckle makers were out of work in Birmingham. The change in fashion was a reflection of the significant social and political changes taking place. One of the cries of the French Revolution was, “Down with the aristocratic shoe buckle!” In 1789, members of the National Assembly in France ceremoniously removed their silver and jeweled shoe buckles and gave them over to the cause of the Revolution.

The heyday of the fancy shoe buckle was over, though they continued to be used for another century or more in formal court dress, military dress uniforms, and servants’ livery.