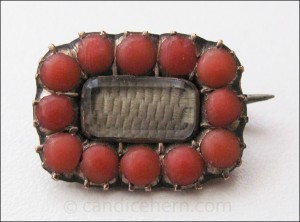 Lace pins are so called because they were frequently used to confine a length of lace at the neckline or at the throat, or sometimes to attach drapery at the shoulder. It is interesting to note that although the term “pin” to mean “brooch” is an American custom, in England these little brooches were always referred to as “pins,” either lace pins or handkerchief pins, probably because their function was similar to that of a dress pin, to hold something in place, and was not merely ornamental. 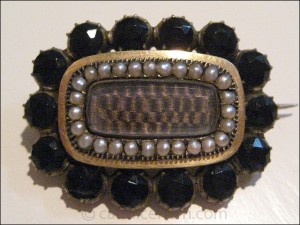 They often have sentimental meaning, however, and are therefore frequently classified as sentimental jewelry. Many of the small  brooches shown in the articles on Georgian Hearts, Mourning Brooches, and Silhouette Jewelry were used as lace pins.

This collection is comprised of lace pins that include a central panel of woven hair under glass. The glass-enclosed panel is generally surrounded by stones or chased metal. The hair would have belonged to a loved one— a child, a spouse, a lover, a parent — and in some cases was simply a token of affection, ie a mother wearing a pin set with her child’s hair. But a great many lace pains were mourning pieces, with woven hair from the deceased loved one, and an inscription on the reverse with the loved one’s name, age, and date of death. (Figure 5 has such an inscription. Click on image to read it.) 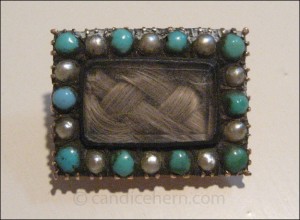 When there is no inscription, it is almost impossible to know if the pin is a mourning piece or a love token. Sometimes the surrounding stones give a clue. Jet, French jet (which is not true jet but black glass), onyx, or other black stones almost always represent mourning. (See Figure 2.) Turquoise can also signify mourning. (See Figure 3.) Seed pearls often represent tears and garnets often symbolized romantic love.

Hair had been used in jewelry for centuries, and was thought to contain the “essence” of the person it came from. Because it is virtually imperishable, hair became symbolic of immortality, and keeping a lock of a loved one’s hair was a way of preserving that essence. Bracelets woven of hair are mentioned as early as the 17th century. During the later decades of that century, woven hair or hair laid in straight strands was used as a background for sentimental motifs or initials in gold wire, primarily in slides and lockets. 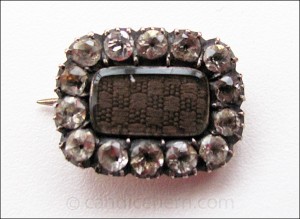 In the Georgian, Regency, and Victorian eras hair-work took on the qualities of a shrine to the loved one. As seen in the article on Mourning Brooches, bits of chopped or dissolved hair were often incorporated into scenes or symbols. Lockets frequently included a back panel of glass under which a curled lock of hair was enclosed. Weaving hair into elaborate patterns came into vogue in the mid-18th century, when hair-woven bracelets and watch chains became increasingly popular, and reached its height of popularity in the mid-19th century when every sort of jewelry was made from woven hair, including earrings and necklaces. 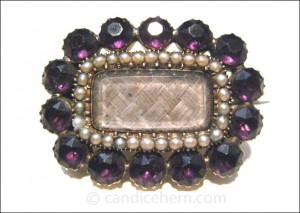 Because hair was such an integral part of mourning jewelry, many people set aside a quantity of hair to be given to their loved ones. In 1793, as the elderly Lady Bute was having her hair cut, she said to her maid, “Keep this for my daughters. They will be glad of it, and very good hair it is for a woman of near seventy-seven.” During the Victorian era, most ladies kept a hair receiver on their dressing table. Hair was removed from her brush and stored in the receiver, and could later be used for jewelry. 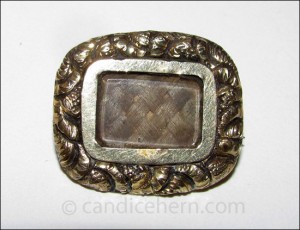 The flat-woven hair that had once served only as a background became the centerpiece of the small handkerchief pins, or lace pins, that became popular in the late 18th and early 19th centuries, and which are represented here. Hair from a loved one could be taken to a jeweler to be woven and plaited in a manner similar to making bobbin lace, and it was then mounted under glass with a gold or gemstone surround. Some of the weaving in the lace pins in this collection is so fine and intricate that one must assume it was done professionally. (See especially Figure 4, which is only ½” across, making the intricate pattern of the weave even more remarkable.) But it was just as common for the hair to be home-woven and placed in pre-purchased brooch frames.

The little lace pins seen in this collection are of the early type most popular during the Regency. Similar pins continued to be worn, in various forms, through the end of the 19th century. During the Regency years, the pins were quite small and delicate, some no bigger than a half inch. They became larger and heavier during the Victorian years.

NOTE: All the images show the pins much enlarged in order to show the detail of the hair weaving. Most are less than 1″ across. The actual dimensions are given in the captions when you click on the image (to see an even larger version).

For more information on lace pins and hair jewelry, see the following sources: