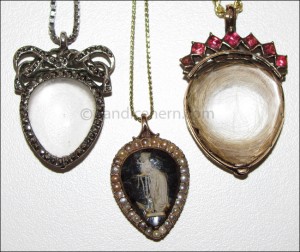 This subset of my Georgian sentimental jewelry collection is all about hearts, and all are pieces I wear. Remember to click on the images to see larger versions.

Heart-shaped jewels have been around since medieval times, but the hearts in this collection have their origins in the 17th century. A popular Stuart jewel made to honor Charles I was the simple crystal heart-shaped locket. The style continued into the next two centuries as a more general token of affection. The locket almost always contained a lock of hair of a loved one. If worn empty, the clear, transparent heart signified truth or purity.

The two 18th century lockets shown in Figure 1 are a typical example of the rock crystal heart. The locket on the right, c1740, shows a heart crowned, which signifies loyalty. The locket on the left, c1770, is made of faceted and polished steel, and is capped by a bow. 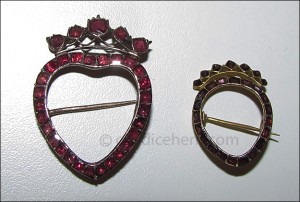 The tiny heart-shaped pendant shown in the center of Figure 1 is an early 19th century example of a sulphide — a ceramic cameo embedded in glass. This is a mourning piece. The cameo shows a woman leaning on an anchor of hope. The seed pearls represent tears. A lock of hair is enclosed beneath a crystal cover on the reverse.

Another popular Georgian style of heart was the simple open heart brooch, as shown in Fig 2. They were almost always made of garnets, a stone associated with love, and were typically given as tokens of affection. The two examples show crowned hearts, again signifying loyalty. These brooches were usually quite small and were worn as lace pins, ie to hold in place a piece of lace or fichu. Note that the smaller brooch, as well as the lockets in Figure 1, use a simplified heart shape without the deep cleft in the center. This form of heart is often seen in 17th and 18th century jewelry. 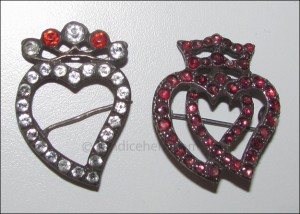 Figure 3 shows examples of a variation on the open heart brooch: the witch’s heart. The tail of a witch’s heart twists to one side (almost always the right side) and is a shape that has been in use since the 15th century. It gained popularity in Scotland in the 17th century when it became known as a Luckenbooth, named for the closed booths in Edinburgh where they were sold as tokens to ward off evil spirits and protect loved ones. Tiny witch’s hearts were often pinned to a baby’s blanket as protection. By the 18th century, the shape had taken on a slightly different meaning — they were given to a loved one as proof of being “bewitched.” As love tokens, they are most commonly made of garnets. Both examples show crowned hearts, signifying loyalty to the “bewitching” one. The double heart, as seen in the garnet example, generally indicates a committed love relationship, such as betrothal or marriage.