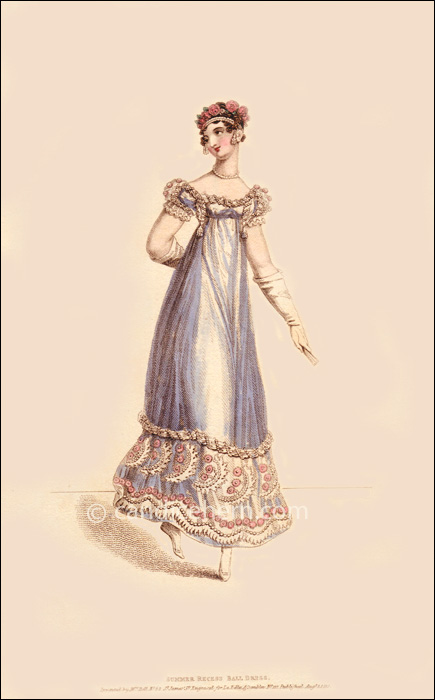 The later years of the Regency saw waistlines for evening dresses rising to the extent that bodices became teeny tiny. One has to wonder if the prints of the period reflect a certain exaggeration, or if some women actually did where such minuscule bodices.

“Summer Recess” in the print title refers to the recess of Parliament, when fashionable Society retreated to Brighton and various other seaside and spa towns. In the General Observations on Fashion and Dress in this issue, the following rather florid introduction is given:

“To catch the motley flower, Fashion, as she flies, we should follow her to Brighton, Cheltenham, Weymouth, and to those rural scenes where royalty and nobility retire during the sultry months of July and August …”

“Frock of white crape, Venetian gauze or fine net, richly embellished at the border with small double Indian roses of a beautiful pink colour, and mingled with leaves of crape and pearls: the body finished in the Oriental style, with short sleeves, which approach nearer to the elbow than formerly, and which are finished by a trimming of broad blond. The head-dress consists of a double wreath of Indian roses, interspersed with the braids of hair that are wound round he summit of the head. White satin shoes and white kid gloves.”