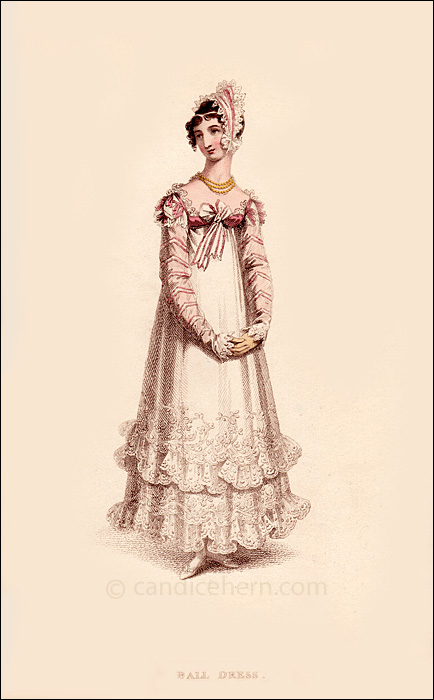 Though I find the head-dress odd, I think the rest of the ensemble is quite pretty. But it is the exquisite rendering of the lace flounces in the engraving that makes this print stand out to me. It is unfortunate that both the artist and the engraver remain unknown to us.

One wonders why the beautiful lace is not allowed to be described in the description below.

This is the period during which the bodice became teeny tiny, and the flounces and other ornamentation of the skirt rose higher and higher. It makes one wonder if all the attention was drawn to the skirt so that people wouldn’t notice how skimpy the bodice was!

“A soft white satin slip, over which is worn a dress composed of white spotted gauze. The body, which is cut extremely low all round the bust, is finished by a light quilling of blond, which stands up around the bosom, and a full bow of ribbon in the centre of the breast, which has an effect at once tasteful and delicate. Long sleeve, composed of transparent gauze, which is striped with satin; these stripes are byas, and they are each ornamented in the middle of the arm with a pearl button; it is finished at the bottom by a single fall of blond. Half-sleeve, to correspond with the body. For the trimming of the skirt we refer to our print, as we are not permitted to describe it: we can only say that the materials are extremely elegant and novel. The hair is dressed rather high behind. The front hair is parted on the forehead, and disposed in light loose ringlets on each side of the face. Head-dress a fichu à la Marmotte, composed of rich blond and satin, and tied at the side in a bow of the same materials. Ear-rings and necklace pearl and topaz. White satin slippers, and white kid gloves.”