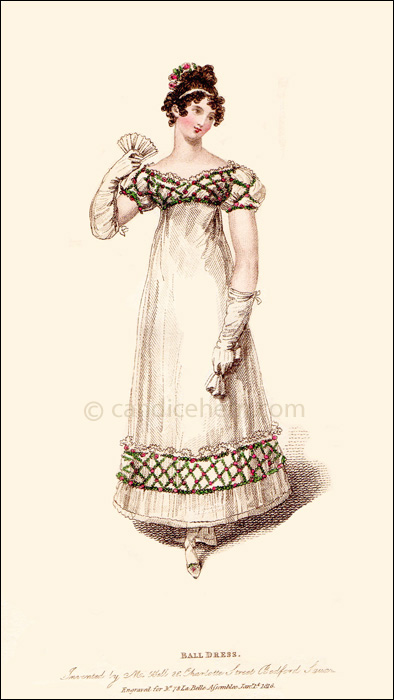 The description for this print is headlined “Christmas Festival Dress.” Even though it is dated January 1816, it appeared in the December issue of the magazine. (All La Belle Assemblée fashion prints are dated for the upcoming month. So, this print is found in the December 1815 issue, in the section labeled “Fashions for January 1816.” All La Belle Assemblée prints on this site are dated based on the date printed at the bottom of the print, not the issue in which they appeared.)

“A skirt of white crape over white satin, rather full, but the fullness thrown behind. The body [ie bodice], which is tight to the shape, is formed of a new material. The sleeve, short and full, is tastefully ornamented to correspond with the body; the bottom of the dress is also trimmed to correspond: the heading of the trimming is white lace, formed in a very novel style; there is a trimming also at the bottom, which is composed of white lace, and finished with edgings of white satin, but by some mistake it has been omitted in the drawing. The hair is dressed lightly on the right side, and in very full curls on the left, the hind hair is brought very high and ornamented with a bunch of French roses. White satin slippers embroidered in front à-la-Francois; white kid gloves, and small French fan. This dress was invented by Mrs. Bell, No. 26, Charlotte-street, Bedford-square.”

It is interesting that the very distinctive red and green trim is not specifically described. Perhaps it was assumed that the trim was well enough depicted in the print and needed no further comment. In the lengthy section entitled General Observations on Fashion and Dress, which details changes in fashion month to month, the following statement is made: “The only novelty in evening dress is the one which we have given in our Print.” Apparently words were not necessary to describe this lovely, very Christmas-y trimming.

The “small French fan” is also referenced in the General Observations: “French fans of embroidered crape have been lately introduced, and we think are likely to become very fashionable.”