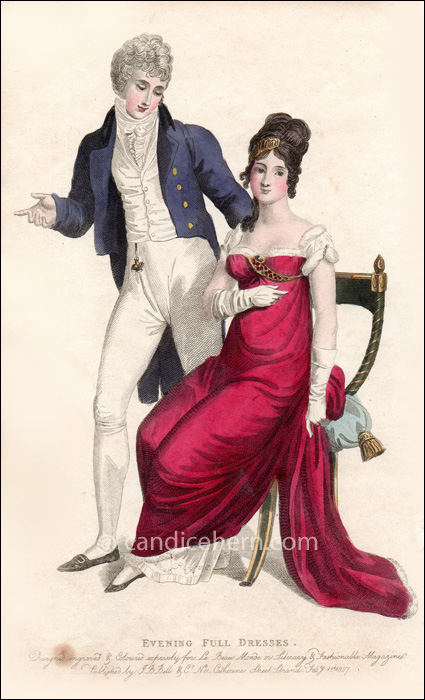 Le Beau Monde was one of the few magazines with fashion prints depicting male and female figures together, which they did almost every month during its short life (1806-1810). The publisher, John Browne Bell, was the son of the publisher of La Belle Assemblée.  They were estranged and apparently very competitive. John Bell, the father, won the magazine race, as his La Belle Assemblée was more popular and lasted through 1839.

“Fig. 1 Evening Full Dress for Gentlemen is composed of a dark double-breasted blue coat, ornamented with basket or plain gilt metal buttons; the coat made lapelled, and with pocket flaps at the side, but the pockets put in the plaits behind. A white quilting marseilles waistcoat, single-breasted; the collar to rise tolerably high, and a small portion of the waistcoat to be seen below the lapell of the coat. Breeches, of white or drab kerseymere, inclining to fawn colour, with a silk string at the knee and four covered buttons; white silk stockings, and shoes with buckles.

“Fig. 2 Evening Full Dress for Ladies of rich Italian ermine sarsnet, worn over a soft white satin petticoat, let in with a gold net at the bottom, terminating at the extreme edge with a narrow fringe of fold; the back of the dress is cut low and square; the front of the vest is quite plain, so as to form the shape of the bosom; a gold net fastened in the center with a broach, confines one side of the breast, passing under the left arm, terminates at the corner of the right shoulder: soft white satin sleeves, carelessly caught up with antique broaches, trimmed with swansdown to correspond with the remainder part of the dress. True elegance ordains the hair to waver in loose ringlets down the side of the face; a few loose bows at the top of the head; a gold net veil blended with the hair, fastened on one side so as to cover part of the hair, is worn with this dress. Two long irregular curls fall on the left shoulder. White kid gloves, black silk shoes, terminate the whole of the dress.”