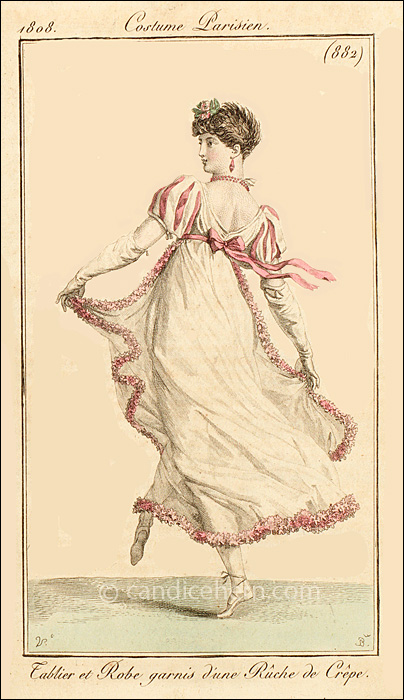 This is one of my favorite French prints because is shows such lovely movement. I find a lot more movement and action in French fashion prints than in British prints. Since a ball dress was meant to be seen while dancing, it seems appropriate to illustrate how the dress would look while moving through the steps of a dance. I think this one looks especially pretty, and shows a provocative bit of ankle with laced up sandals. (The term “sandals” did not refer to strappy open-toed shoes such as we wear, but any slipper that laced up over the ankle, like a ballet shoe.) The sleeves, which are called “melon sleeves” in British prints, are slashed to show what looks to be pink satin or crepe beneath, and the apron (“tablier”) and hem of the dress are edged in pink crepe ruching.

Also note the short, cropped hairdo. We don’t often think of such a short hairstyle being worn during the Regency period, but it does appear in fashion prints now and then, especially in the first decade of the new century, and more often in French prints. Post-revolutionary France saw a reaction against the enormous hairdos seen by aristocratic women in the years before the Revolution. Where once a woman could not have too much hair, after the Revolution she could not have too little. The carefree short styles reflected a new freedom for women that was also seen in the simple classical lines of their dresses. These cropped hairdos were not universal, even in France, but were definitely seen as a bold fashion statement.